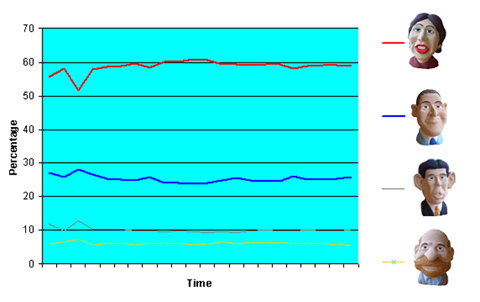 Prime Minister Helen Clark has exceeded most pundits’ expectations in the Masterpet Dog Tucker poll, but a few days out from the election it may prove to be one poll she doesn’t want to win.

Over the past six weeks New Zealanders have been putting their votes where their dogs’ mouths are, purchasing Helen Clark for their dogs at a ratio of 61:39 to the sales of John Key.

The poll, which has been run in conjunction with KiwiBlog, has been ratified now that Helen Clark has virtually sold out.

Masterpet spokesperson Peter Couchman said this was not a poll either of the leaders were particularly keen win.

“Helen has been quite badly savaged since day one, back in mid September.”

Mr Couchman said he had also received unconfirmed reports of people buying Helen Clark as a memento, rather than for their dog to maul.

National Party leader John Key has taken a shine to his latex likeness during the campaign, appearing in photographs with his toy.

“The Nats have obviously seen it as a cheap way of circumventing the electoral finance act, and it might just be working,” Mr Couchman said.

We had a great time handing these out from the blogmobile, and did a feature on Sky News about them. Has been a lot of fun, and amazing how popular they are with people.