Labour came far too close to doing something that has never ever happened before in recent New Zealand electoral history – having an Opposition lose a seat in a by-election. No Government has won a seat off the opposition in the 59 by-elections since 1936.

And even worse it was not a marginal seat – it was a safe seat that has been held by Labour since 1938 (in that its predecessor seats were also Labour).

I was hoping the majority would be below 3,000 – my pick had been 2,500. I never thought it would almost drop to a triple figures and get as low as 1,080. In some ways it was the ideal result. If the margin had been 500 or so, then you’d be kicking yourself for not doing that extra bit to win it. And if Labour had actually managed to lose the seat, then Goff would be goneburger, and National doesn’t actually want Goff rolled.

So what happened? Well as I blogged during the week, I didn’t expect there to be a uniform swing – I expected different swings in different areas. I’ve divided the seat up into four areas – Porirua East, Porirua West, Northern Suburbs and Kapiti.

I had been expected Porirua West to be like Porirua East, and not swing much. But in some booths in Titahi Bay Hekia lifted her vote share by 9% and Faafoi lost 15%.

The Kapiti area voted Labour last time, and flipped to National this time. And what is more extraordinary about this is it happened despite noisy local opposition to a new expressway.

In 17/42 polling places the vote share for Labour dropped by 10% or greater. That is huge.

Interestingly the advance votes actually had Faafoi getting a bigger vote share than Laban did in 2008. This reflects my view that Hekia got real momentum in the final week as several community leaders endorsed her, but by then many advance votes had already been cast.

Matt McCarten didn’t achieve a great result (but he did get lots of signatures for his petitions) and the Greens had a solid third. ACT was battling it out with Legalise Cannabis for 5th place. What was the total CR and CL vote in 2008 and 2010?

Labour did manage to retain the seat, but they had a massive swing against their candidate. Again, this is historically very rare in by-elections. I’ve gone through the last few by-elections to note what happened:

So this has not happened in the last 35 years – an Opposition almost losing a safe seat in a by-election.

The closest we have is 1992 Wellington Central, and they have a number of things in common

The really interesting thing is that in the 1993 general election, Laidlaw lost the seat to Gardiner – it was the only seat lost by the Opposition in that election.

Kris has won the seat, but it is now a marginal seat, and he is going to have to work very very hard in the community to match Hekia and retain the seat in 2011. 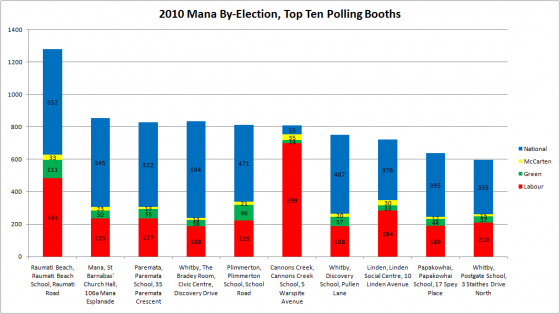 A reader sent me this graph, of the ten largest polling places in Mana. It tells a big story about how Cannons Creek saved Labour.