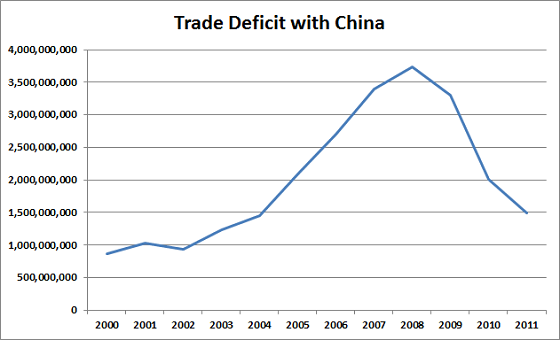 This is the annual trade deficit with China over the last decade. Both the Greens and Winston rail against imports and say we need to export more and reduce the trade deficit.

They also both voted against the China-NZ Free Trade Agreement in 2008. They both still maintain it was a mistake, and a bad thing to do.

The results speak for themselves. After the trade deficit rose from $1b to almost $4b, it has reduced to $1.5b in just three years.

The Greens, like all of us, care deeply about the environment. But on economic policy, they and Winston are consistently wrong. They are skilled at talking about problems, but their solutions are toxic.

Exports to China in the three years prior to the FTA were $5.7b. In the three years since, they have been $13.1b. Those exports have helped keep kiwis in jobs, have grown the economy and provided billions more in tax revenue to help pay for schools, hospitals and welfare. And if the Greens and Winston had their way, it would not have happened (unless you wish to argue the massive unprecedented growth in exports was a coincidence).