Alan S. Blinder and Mark W. Watson are economists from Princeton University who have researched and compared economic performance in the USA under all Presidents starting with the second term of Harry Truman and ending with the first term of Barack Obama. The abstract of the research paper says in-part.

The U.S. economy has grown faster—and scored higher on many other macroeconomic metrics when the President of the United States is a Democrat rather than a Republican. For many measures, including real GDP growth (on which we concentrate), the performance gap is both large and statistically significant, despite the fact that postwar history includes only 16 complete presidential terms. This paper asks why.

These two charts taken from the report set the scene. 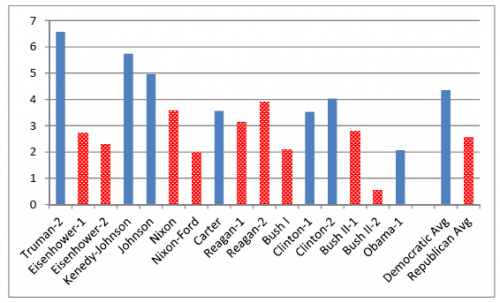 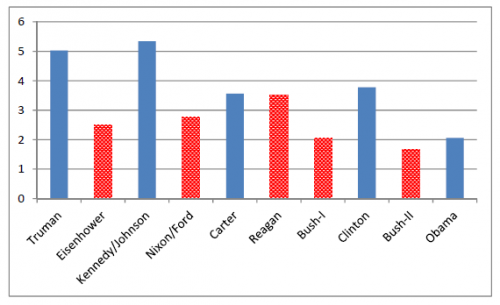 According to the analysis by Blinder and Watson the US economy performs better under Democratic presidents across many metrics.

The U.S. economy not only grows faster, according to real GDP and other measures, during Democratic versus Republican presidencies, it also produces more jobs, lowers the unemployment rate, generates higher corporate profits and investment, and turns in higher stock market returns. Indeed, it outperforms under almost all standard macroeconomic metrics. By some measures, the partisan performance gap is startlingly large, so large in fact, that it strains credulity, given how little influence over the economy most economists (or the Constitution, for that matter) assign to the President of the United States.

So the facts are that the four highest growth rates came under Democratic presidents, four of the five worst under Republicans. Why is this? And what some of the key factors that Blinder and Watson analysed and what were their findings?

Factors that made little or no difference

Factors that did make a difference

Other factors that were analysed included productivity, wars, financial sector disruptions, confidence, and the joint effects of multiple shocks.

So have Democratic presidents simply been making better macroeconomic policy choices? Blinder and Watson say no.

There is a systematic and large gap between the US economy’s macroeconomic performance when a Democrat is President of the United States versus when a Republican is. While other macroeconomic indicators largely agree, we have concentrated on real GDP growth over the full sample, which is 1.8 percentage points higher under Democrats–a stunningly large partisan gap relative to the sample mean of 3.3 percent. The growth advantage is correlated with Democratic control of the White House, not with Democratic control of Congress. A similar partisan growth gap appears in Canada, but not in the UK, France, or Germany.

On the spending side, much of the D-R growth gap in the United States comes from business fixed investment and spending on consumer durables. And it comes mostly in the first year of a presidential term. Yet faster growth under Democrats is not forecastable by standard techniques, which means it cannot be attributed to superior initial conditions. Nor does it stem from different trend rates of growth at different times, nor to any (measureable) boost to confidence from electing a Democratic president.

Democrats would no doubt like to attribute the large D-R growth gap to macroeconomic policy choices, but the data do not support such a claim. If anything, and we would not make too much of small differences, both fiscal and monetary policy actions seem to be a bit more stabilizing when a Republican is president—even though Federal Reserve chairmen appointed by Democrats preside over faster growth than Federal Reserve chairmen appointed by Republicans by a wide margin.

It seems we must look instead to several variables that are mostly “good luck,” with perhaps a touch of “good policy.” Specifically, Democratic presidents have experienced, on average, better oil shocks than Republicans (some of which may have been induced by foreign policy), a better legacy of productivity shocks, more favorable international conditions, and perhaps more optimistic consumer expectations.

These factors together explain slightly more than half of the 1.80 percentage point D-R growth gap. The rest remains, for now, a mystery of the still mostly-unexplored continent. The word “research,” taken literally, means search again. We invite other researchers to do so.

It does need to said that GDP under Truman, Kennedy and Johnson was much higher than more recent times. This is important as it explains part of the difference in the growth rates between Democratic and Republican presidents. Also the excellent macroeconomic management by Bill Clinton in returning the US federal government to surplus is a feat that has been rarely achieved. On the other hand President Ronald Reagan oversaw solid growth in the economy under his watch.

There is much that is open to debate on this topic but the conclusion that ‘good luck’ played a big part is fascinating. And smatterings of ‘good policy’ mixed in here and there. If it hasn’t already been done in New Zealand it would be most interesting to see a research project on similar lines.

Alan S. Blinder and Mark W. Watson: Presidents and the U. S. Economy: An Econometric Exploration
Charts from Blinder and Watson (page 42)

Other sources consulted during the preparation of this post