New Zealand had a record annual net gain (more arrivals than departures) of migrants in the October 2015 year (62,500). It resulted from a record 120,100 migrant arrivals and 57,600 migrant departures. The annual net gain in migrants has been setting new records for the last 15 months. In October, net migration passed another milestone with the first annual gain in migrants from Australia in over 20 years (since the November 1991 year). Fewer New Zealand citizens departing for Australia and increased arrivals of both New Zealand and non-New Zealand citizens drove the change. 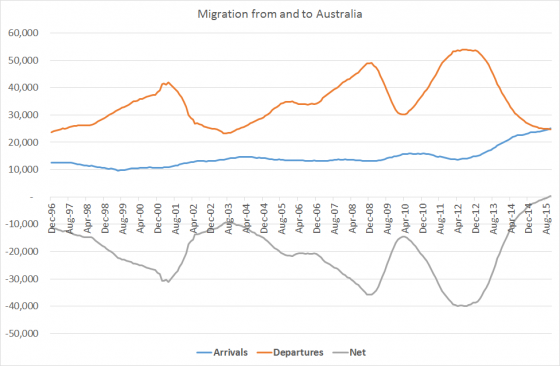 Here’s the net migration figures for October years in the last decade:

This is very unusual. People tend to migrate from smaller places to larger places.

It is a hugely significant turnaround.