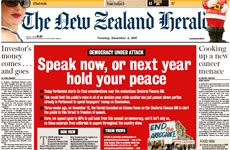 The Herald does another front page editorial on the Electoral Finance Bill. This Bill is oppossed by almost every independent institution there is – almost universal media opposition.  The Human Rights Commission concerns have not been fully met.  The Law Society, the Institute of Accountants have both called it fundamentally flawed.  Even the Electoral Commission has said they can not interpret it, and the so called solution to their concerns hasn’t even yet been publicly published.  I’d even say the majority of left wing commentators like McCarten, Harre and Trotter are saying the status quo should prevail, or are at best very very luke warm on proceeding.

There will be no winners if the Electoral Finance Bill is passed into law this week. The Labour Party will have revised the electoral rules to suit itself, but that will be a pyrrhic victory if it loses the next election, as polls suggest it will. The National Party has promised to repeal the bill as soon as it gets the chance.

Thus our electoral law is reduced to a game of political ping-pong, a game that would not have started had the Government done the right thing from the beginning.

Even its friend the Green Party has been urging it to refer its concerns about election finance to an independent body that could recommend changes to the law if necessary from an impartial position.

Unless the Greens and United Future act on their reservations and withhold support for the bill this week it will pass. And they will be as guilty as Labour and New Zealand First for the offence to free speech.

The self-serving electoral fix is being done now in the hope it might be forgotten at an election 11 months hence.

Money does not win elections unless the message it is financing strikes a popular chord. Labour is legislating in fear of messages it might not like. At the same time, it has given parties in Parliament the right to use public funds for purposes the Auditor-General ruled improper at the last election.

The country should not stand for this. It is not unduly susceptible to paid campaigns. The bill is an insult to our intelligence as well as our rights. Even now, at the 11th hour, it can be stopped and sent to an impartial panel. Let’s hope the common sense outside Parliament can prevail.

Next year will be very difficult for the Government.  They will be trying to get their message across, but what will the media probably be reporting:

Labour needs to ask themselves one question.  Is it worth losing the election over?