UMR sent out on Friday their latest Mood of the Nation (not online yet) – an excellent read with lots of info. 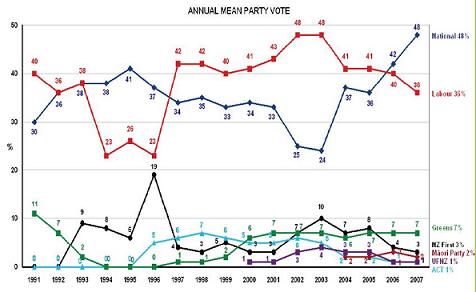 The above graph is their annual averages for each party since 1991. The recovery since 2003 for National is quite startling.

They also show their party vote support for each month in 2007.

They also measure net favourability ratings for each leader. I’ll give for each what they started and ended the year on.

Most results are no surprise. I thought NZ would be higher than 60% on homosexual relations and abortion. Mind you this is a poll on personal morality, not on legality.