Bernard Hickey blogs on what the latest Wall Street panic means for us, and it isn’t pretty.

JPMorgan Chase has moved to purchase Bear Sterns, but for only US$2 a share, which is a total value of just $236 million. On March the 14th the shares were trading for $30 a share, which valued the company at US$3.54 billion. A year ago they were worth $10 billion. Their annual turnover is $16.2 billion so $236 million is almost saying they are worthless. 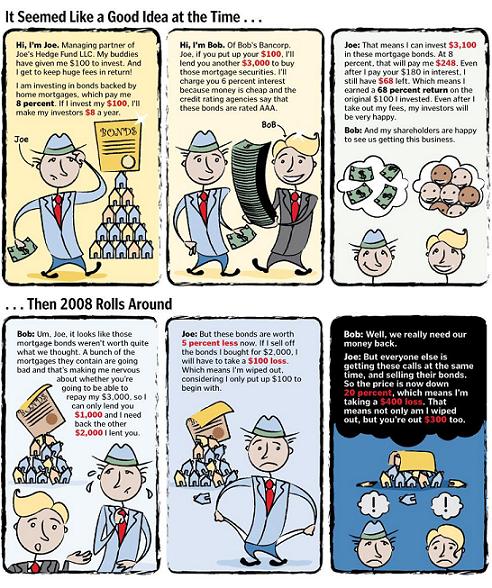 I got e-mailed this graphic from a contact who got it from a staffer at the International Monetary Fund.  I think it may have been in the Washington Post, and it is a useful guide to what happened.

Anyway back to Bernard:

The news coming out of Wall St this morning is simply shocking and is something every New Zealander should understand and care about.

Put simply, panic and fear rule in the world’s financial capitals right now and it will cost us all in one way or another and sooner or later. …

Translation: This is big, don’t think it won’t affect you.

In the last five years since our debt-fuelled consumption and housing boom started in January 2003, we have borrowed around NZ$39.6 billion from foreign investors.

Translation: We owe a lot of money overseas and are vulnerable to anything that may impact what those investors do.

The moment we lose the confidence of these housewives and dentists is the moment our interest rates rise and our currency collapses. This has been referred to as the Uridashi Tsunami. We know it’s coming. We just don’t know when.

Translation: Start getting off the beach now, not once you can see the tsunami about to hit.

The squeeze on disposable incomes for anyone with a big mortgage will get tighter and tighter.  Our economy will slow and may even fall into a recession. That is stagflation.

Translation: We may get the worse of both worlds. High interest rates, high prices and low economic growth.