Before the Internet, Obama would have easily escaped the issue of his links to Rev Wright. No voter would have seen Wrights’s insanities and hate, and Obama’s ever changing lines would not be heavily scrutinised by the media who love him. And neither Clinton nor McCain could or would go near the issue.

But just as You Tube got the original videos seen, so we also see the first real attack video on Obama, and it is pretty effective. It make Obama look, well like an ordinary politician, and once he is reduced to that level, more focus comes onto his actual beliefs and policies.

The video isn’t done by any formal campaign, just by one of many of thousands of politically active people who have access to video editing technology. Now I am not saying the video is fair (it isn’t) but it is a reality that power has partly transferred from the formal campiagns to a wider array of activists. McCain has in fact sacked a staffer who merely forwarded on a link to the video.

Is it hurting Obama? Well look at the Gallup poll: 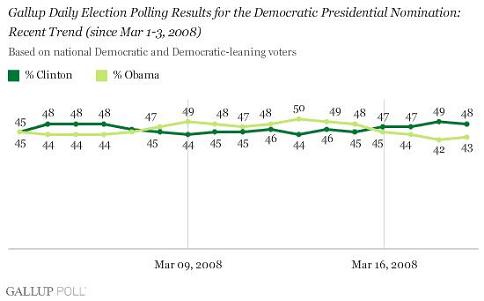 Plus the National polls are showing McCain ahead of Obama. And more critically in the big swing states of Florida, Ohio and Pennsylvania McCain has an average lead of 11%, 7% and 2%. Now months to go and this will change but I am hearing the Republicans would now rather have Obama than Clinton as their opponent.

Susan Estrich has a useful column on this:

What the critics are saying, sometimes out loud but also in quiet whispers, is that they don’t understand how a man who gives speeches about moving past the racial divide would choose a racist minister to be a member of his family, about why, with all the churches in Chicago, Obama not only picked this one but remained true to it, about how he could not have known what others knew, could not have heard what others did.

The critics will tell you that blaming white America for spreading AIDS to blacks is not the same as an elderly white woman admitting that she is afraid of black men, and that there is a difference between standing by the grandmother who raised you and standing by a religious leader who preaches hate.

Personally I liked Obama’s speech on race, but I think the growing issue for him is his evasions. He at first claimed he had never heard Wright say the controversial stuff, and then it emerged he had. As with many scandals, it is how you react to them, rather than the original scandal, which proves lethal. Ask Bill Clinton.