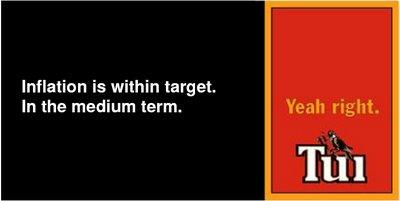 Okay this oen isn’t an official one. I got it from Paul Walker. 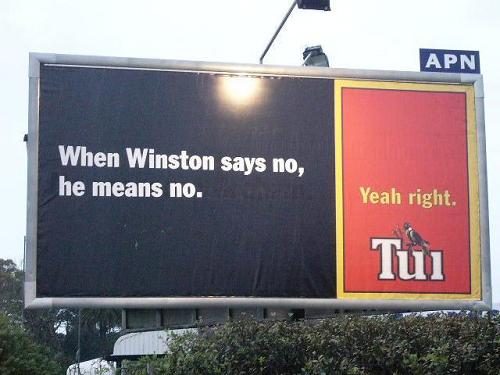 This one however is real, but alas it may be short lived. The Herald reports:

A Tui billboard saying “When Winston says no, he means no – Yeah, right” has brought a warning that it may breach the Electoral Finance Act.

The billboard is in the Tauranga electorate Winston Peters is desperate to win, and the Electoral Commission told the Herald it would write to brewers Tui saying it could be “election advertising” against him.

I am not surprised. It was pointed out during the hearings on the then EFB that commerciakl advertisements could be caught up. And alas satire is also covered.

Tui brand manager Jarrod Bear said the brewer had not received any correspondence from the Electoral Commission and was not considering taking the billboard down.

Asked if Tui was aware of the legislation when it came up with the billboard, Mr Bear said, “Not particularly, no, not the finer details of it.

“It sounds a little bit crazy and it’s definitely not our intention to be campaigning in favour of one or the other.

Also intentions have little to do with the application of the law.

The possibility that Tui billboards making satirical political references would breach the act was raised while it was being put through Parliament last year. Whether the Tui billboard is an election advertisement depends on whether it can reasonably be seen as trying to persuade people either to vote for Mr Peters, or against him.

means any form of words or graphics, or both, that can reasonably be regarded as … encouraging or persuading voters to vote, or not to vote, for 1 or more specified parties or for 1 or more candidates or for any combination of such parties and candidates:

Now note the test is not what the intention of the creators is. The test is simply whether that particular form of words or graphics ends up encouraging or persauding people not to vite fir Winston.

And it is hard to argue that a billboard which suggests he does not tell the truth, or is evasive or deceptive does not have an effect in encouraging people not to vote for him. It is a very negative attribution.

So alas the end result maybe that all of election year, Tui can not do billboards which take the piss out of a politicans. Says who? Well the politicians who passed the law.