Most focus in on the US election, and the NZ election. But Canada goes to the polls tomorrow (in Canada).

It looks like a status quo election. The Conservatives to win again, but as a minority Government – not a majority. 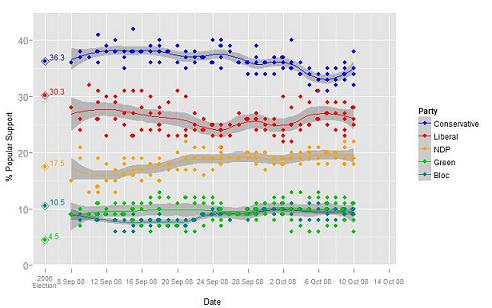 This graph from Wikipedia shows the last few weeks. The Conservatives dipped but have started to recover. The left wing NDP have done well.

On the latest poll results the Conservatives would gain 11 seats, Liberals lose 23 seats, NDP gain nine, and Bloc Quebecois gain three. But if one looks at the provincal breakdowns it is possible the Conservatives could lose seats in Ontario and Quebec as a small change can under FPP produce huge changes in seats held.

I am hoping my friend Patrick Brown will get re-elected in Barrie. The local newspaper has endorsed him, which should help.