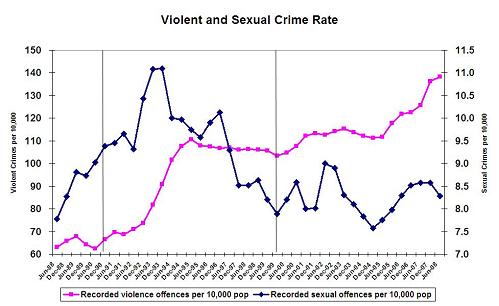 This shows the rate of violent and sexual crime per capita since the current method of recording crime began.

Let us start with the pink line of violent crime. It did increase massively from 1992 to 1994 especially. No doubt the high unemployment was a factor. Sadly you get high unemployment when you inherit a near bankrupt economy with huge debts and deficits, and have to take tough measures to get through it.

But then for four years the violent crime rate stayed stable, and even declined a bit. Yes from 1995 to 1999 it was a slight downwards trend.

Then after 1999, despite the continuation of a fall in unemployment, it increased slowly but steadily for three years, started to very slightly trend down for two years and for the last three years has increased dramatically.

The blue line of sexual crimes has varied a lot, possibly reflecting the smaller number of crimes. From 1990 to 1993 these crimes increased in frequency. But then from 1993 to 1999 there was a massive fall off in sexual crimes – except in one year.

Since 1999 it has been a varied picture. Generally it trended up for the first three years. Then for the next three years after that it fell off to go even lower than in 1999. But again since 2005 it has risen again through to 2007 before what may be the start of a decline in 2008.