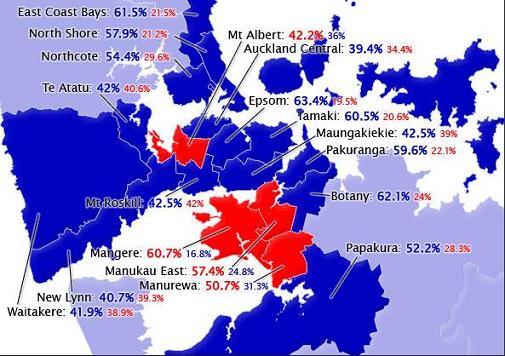 Starting at the top, the three northern seats of East Coast Bays, North Shore and Northcote were solid blue. Their party votes went up 9%, 4% and 11% respectively.  In East Coast Bays almost three times as many people voted National as Labour. These seats now are counters to the South Auckland seats.

Out west we saw the near impossible – National won the party vote in all three West Auckland seats. Tim Groser worked hard on New Lynn to lift the party vote by 10% to 41%, with Labour dropping 12%. Te Atatu went from 32% to 42% and Waitakere from 33% to 42%. Listing the vote 10% in Westieville was great work.

In central Auckland we have Auckland Central. National lost the party vote by 12% in 2005 and won it by 5% this time. This seat has been held by Labour since 1919 (apart from once going further left to the Alliance), making Nikki Kaye’s 1,100 vote victory all the more remarkable.

Mt Roskill also just went to National on the party vote, and Goff’s majority went from 9,400 to 5,500 – still very safe. His leadership predecessor in Mt Albert won the party vote by 6%, and had a slight dent in the electorate majority from 11,400 to 8,700.

Maungakiekie was another big mover. The party vote went from a 13% deficit to 45 lead. And Peseta Sam Lotu-Iiga scored an 1,800 majority from an close to 7,000 majority to Labour previously. Sam is one of the most well liked guys in the National Party, and had one of the biggest teams in recent memory on the hustings. He had between 10 and 25 people door knocking both days every weekend.

Out East we have Pakuranga which was no surprise. It is another close to 60:20 seat. Maurice is very popular locally and scored a 13,000 majority.

Botany. This brand new seat got the second highest party vote in Auckland for National – 62%. Pansy Wong also got a 10,000 majority. ACT’s Kenneth Wang was in third place but got a respectable 4,500 votes.

Note the above comparisons are all to 2005 results adjusted to new boundaries. Also a more formal analysis will be done when we have final results.