First we have some nice photos from the Auckland protest, equating Israel with Nazi Germany. 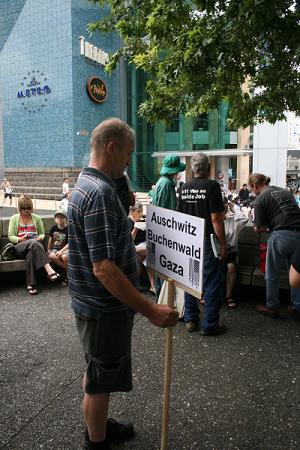 Oh a nice professional sign comparing Israel’s response to 10,000 rockets to Nazi death camps where Jews were gassed, and their possessions looted. 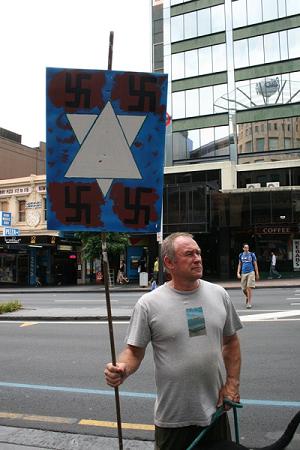 While this protester gets marks for his home made sign.

Ironically I suspect that if WWII was occuring today, they would be demanding Churchill be placed on trial, for an unacceptably high civilian death toll in Germany.

Anyway once again I am pleased to quote Chris Trotter. Chris explains why so many on the left support liberation movements:

A fairly substantial chunk of the New Zealand Left would echo Keith’s view. In part this is because a great many leftists see Israel as the primary instrument of “US imperialism” in the Middle East – making the Palestinian cause one of the World’s last great unresolved struggles for national liberation.

For leftists of Keith’s generation, people who came of age in the early-1960s, when the empires of the European powers were being challenged by a multitude of national liberation movements, the anti-colonial struggle was something to be supported wholeheartedly and unequivocally.
Even more exciting for these young leftists was the fact that most liberation movements espoused some variant of the socialist ideology, and many enjoyed the backing (overt or covert) of the Soviet Union and/or the Peoples Republic of China.
National liberation struggles and the socialist revolution seemed inextricably linked.

Except of course when it came to liberation movements to free countries under Soviet control!

Hamas is anything but secular and quasi-socialist, and its dedication to the elimination not only of Israel, but of the entire Jewish people, is unequivocal. In the words of its own charter:
“The Hamas has been looking forward to implement Allah’s promise whatever time it might take. The prophet, prayer and peace be upon him, said: The time will not come until Muslims will fight the Jews (and kill them); until the Jews hide behind rocks and trees, which will cry: O Muslim! there is a Jew hiding behind me, come on and kill him! This will not apply to the Gharqad, which is a Jewish tree.”
The last time people talked about the Jews in this way, they were wearing brown shirts and jackboots. And the fate they had planned for the Jewish people gave new meaning to the word “disproportionate”.

And this is not some anicent centuries old text, this is the Hamas charter.

Which is why I find it so hard to respond with any degree of positivity to Keith Locke’s call for New Zealand to stand up and be counted among the outspoken opponents of what is happening in Gaza.
Were Hamas a secular and socialist organisation dedicated to the creation of a secular and socialist state of Palestine: a state where all those with an historical and/or religious attachment to the Holy Land; Jews and Arabs, the followers of Judaism, Islam and Christianity – all the people of the Book – could live together in peace and harmony; well, then I might feel differently.
But it isn’t.

Almost without exception, liberals accept that the Israelis are the baddies. They are the ones with the fighter planes, helicopter gunships and tanks tearing through the ghettoes of Gaza. As John Minto opined this past week they are the primary aggressor. Ipso facto, they are morally inferior.

The truth is considerably different. The Gaza Strip is a territory controlled by an Islamic fundamentalist faction that has sworn to wipe Israel from the planet. It has been doing its best by launching rockets at Jewish settlements, arming and directing suicide bombers, and ending the uneasy ceasefire.

Yep, they are delighted that they finally got Israel to respond.

The only problem is that Hamas are not freedom fighters. In fact, they are not even sane. They are religious fanatics. Fundamentalist nutters armed with guns, rocket-propelled grenades and rockets. Their idea of a Palestinian state is one that eradicates Israel. They emerged victors after a bloody civil war with the Fatah party in 2006 killing plenty of innocent civilians themselves and now consider that Hamas is the frontline in the fight against the infidel.

Yet these are the people that Minto, the Greens, the Catholic fringe and Kiwi liberals seek to embrace.

The UN has got it right (this time). They have called for both sides to stop fighting. But the Greens and Minto want Israel to unilaterally stop, and nothing to be done about the rocket attacks from Hamas.

This is not to suggest that Israeli actions over these past 60 years meet any antipodean morality test either. There have been inhumane actions and outrageous abuses. But not this time: not in Gaza in 2009. Israel is responding as any nation would were it under continual military harassment.

This is quite right. Israel bashers can’t tell the difference between the times when their actions have been outrageous, and legitimately responding to Hamas and their rocket attacks.

The death of innocents in Gaza is regrettable it is sad and it is wrong. But all the more so for being orchestrated by Hamas, in pursuit of their despicable ends.

And this could all end is Hamas will agree to cease the rocket attacks.