NZPA run a press release service called mediacom. Basically PR companies pay a fee and NZPA distribute their press release for them. This means you can pick them up if you receive an NZPA feed (they are in their own category so no one mistakes them for news).

They also distribute these releases to other news organisations, and some time ago added Kiwiblog onto the list. So every day I usually get half a dozen or so releases through NZPA’s Mediacom service.

Most of the time, it isn’t stuff I find particularly useful, but sometimes there is a press release worth waiting for, such as the one I got this afternnon announcing that members of the Blues Rugby Team, and their cheerleaders, were jumping off the Sky Tower. And they even provided a link to photos. 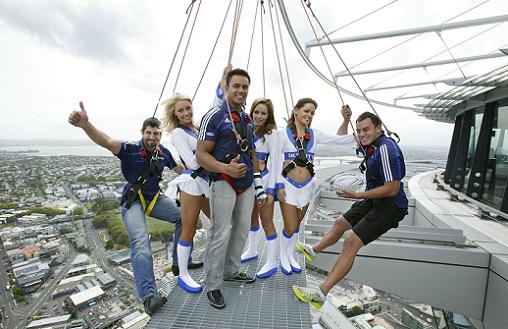 So it allows me to republish the photo, for all the Blues supporters out there!