I’m old enough to have attended the last victory (won Government) conference for National. It was in 1991 and was also in Christchurch. Both saw a new Government nine months or so into office, and both coping with a nasty recession.

However in 1991, the conference was not just attended by the party faithful, but there were around 8,000 protesters, close to 1,000 Police (they cancelled leave for every police officer in the entire South Island), and bomb squad sniffer dogs. While the 2009 National Conference did not attract even a sole protester despite National now being in Government. I can’t ever recall a conference by National in Government that didn’t attract protests before.

So the conference was obviously a buoyant one, with delegates and MPs in good heart. It was at the Christchurch Convention Centre, and here is the view from the Crowne Plaza next door.

The PM’s speech was of course the highlight, and it was very good planning he used it to announce a timely and major initiative. In Government, people like a speech of substance, not just bashing the other side. In fact John did not mention the Opposition once during his speech.

Bill English gave a very sober and insightful speech on the realities of the economy and the challenges ahead. And I thought Simon Power’s speech on all the justice initiatives was first class. Also was good to see the Young Nats President Alex Mitchell use his speech not just to fellate the party, as Young Nats sometimes do, but demand action on voluntary membership of student associations and warn against any moves to increase the alcohol purchase age from 18 to 20.

What didn’t work so well was the Ministerial forums. Maybe I’m just getting old and cynical, but hearing five minute brag sessions from Ministers about what they are doing turns me off. I’d rather have less Ministers with more time to talk policy in detail, than giving each Minister five minutes and time for only a couple of questions. I did enjoy joking that anyone who wanted to ask Paula Bennett a question should be obliged to first state their IRD number 🙂

Even more than that, what I personally would have preferred is a Ministerial Q&A session – say for 90 minutes. I know this was meant to be the victory conference, so maybe they may do it next year. But I think giving delegates the chance to ask questions of any and all Ministers is a good look, and gives delegates more of a chance for interaction.

Then we had the Board and Presidential elections. I’ve known the five people elected to the Board for pretty much a decade or more. They are all good people, who will do a diligent job on the Board. There are not any of them that I would not want on the Board as they bring a good mixture of skills, experience and geography.

But having said that, I am disappointed Wira Gardiner did not get on. As I had a role in the vote count, I thought it was inappropriate to “take sides” before the vote, but I do not share any of the reservations that Whale Oil had towards Wira. I’ve known Wira since his first wife was a candidate and he has been involved for at least two decades, including service as a Vice-President of the Party.

His record of achievement speaks for itself, in that he is now formally Sir Wira. Both Labour and National Governments have used him as a trouble shooter to sort out dysfunctional agencies. Someone with that governance experience would have been well placed to contribute to the Party’s Board. Plus there were also some obvious advantages in terms of relationships with the Maori Party – but that is a secondary consideration to me. Merit is what I value.

So why did Wira not get elected? Well there was a variety of reasons. Hekia, his wife, being an MP was one of them – but not really the major factor in my opinion. The main reason is that Wira was touted as a potential President, despite not being a current Board member. And it seemed there was a reasonable chance of Wira becoming President if he did get elected. By no means certain, but a reasonable chance.

What this meant, is those who did not want Wira to be President, followed Whale Oil’s advice and ranked him lowly to keep him off the Board. I have no doubt he would have been elected if he ruled out standing for President. Now I was not a delegate myself, so didn’t have to think about who I would leave off the Board if Wira got on. As I said, they are all good people – but there were only five vacancies.

I believe the number one objective for the President is to raise the money the party needs to function, and win elections. Peter’s business background should do him well in that regard and again respectivelly disagreeing with Whale, I expect Peter will remain President through until the 2011 election at least. Of course it will be up to delegates at the 2010 conference to make that decision on re-election to the Board.

Also have to mention the well deserved awarding of the Sir George Chapman trophy for service to the party went to our own blogging Homepaddock – Ele Ludemann. I won’t even mention how she was alseep in her room when they awarded her the prize 🙂 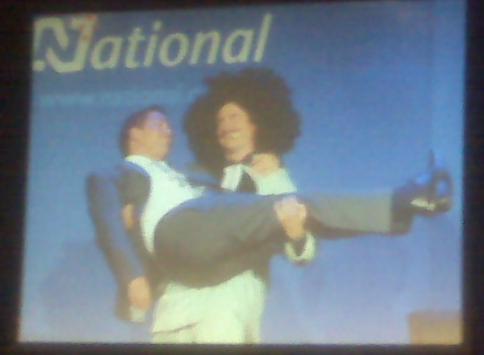 This is a hazy photo of the screen, but had to share this photo of Tauranga MP Simon Bridges forming part of the conference dinner entertainment, Simon took it all in good humour as the entertainers put him into a number of poses.

The conference saw Judy Kirk retire as President also after just under seven years in the job. This makes her the third equal longest serving President. Sir Alex McKenzie did 11 years, Sir George Chapman nine years and Sir Wilfred Sim and Ned Holt both also did seven years. I was counting votes during the farewell to Judy, but understand it was warmly given and received.

The number of people attending must be a record for a non election year. Around 700 people attended and there were 574 voting delegates. I saw many people there who hadn’t been to a conference for quite a few years.

It will be interesting to see what the mood is like in twelve months time at the 2010 conference.