Most readers will be aware of the power reforms introduced by Max Bradford in 1998. Labour and others would have you believe they are responsible for everything bad in the power sector, even though all they did was fairly sensibly bring in competition at the generator and retail level. 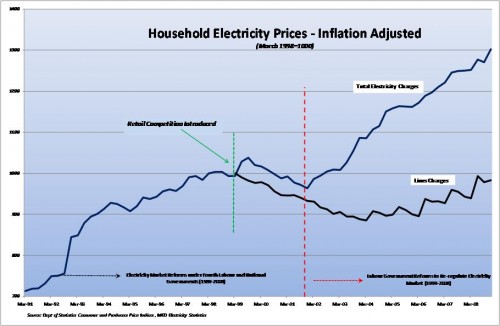 This chart of inflation adjusted prices dispels the myths that the Bradford reforms are what led to the price increases. Prices were increasing prior to the reforms. Immediately after the reforms both fixed and total charges decreased in real terms. And it was after 2003 that total prices rose faster than inflation. Interesting line charges are still cheaper in real terms today than in 1998.

Talking of power charges, had a very good experience with Powershop recently. They have no fixed daily charges – you buy your power in blocks, which has the effect of becoming much more aware of usage patterns, and cost.

Now I accidentally left a heater on when in the US in July. It was on temperature control, so no danger, but meant my daily unit consumption increased from 8 units a day to 15 or so. Then when I was overseas in Hawaii, I missed a meter reading so they did an estimate and the computer estimated I was using 35 units a day. And this was far too much – especially as I was overseas using almost none.

So when I got back, I did a meter reading and entered it in. However the reading was so far below what the system was expecting, the website would not accept it.

So far not good, but I filled in an online message and explained the reading was low as I had been overseas and was correct. The next day not only had the system accepted the reading, but I got a personal phone call to check I was now happy. Now that is good customer service.

The system is now estimating I used 6 units a day, which is too low. But once I do another reading (you can do them weekly if you want), it will get closer to the mark.

I’m actually looking forward to gaining a year’s worth of data, so I will be able to see how much extra the cost is in winter of sticking a heater on etc. Also I am getting a good idea of how much a unit of power costs in winter, spring and summer.

Not everyone likes doing their own power purchasing, but I much prefer it to just getting sent a bill every month. Also Powershop never threaten to disconnect you for paying late!