One of the issues discussed in reviewing MMP, is whether or not the current 5% threshold should be reduced or even eliminated. I thought it would be interesting to look at what the results of the five MMP elections would have been, if there was no threshold, or it was reduced. 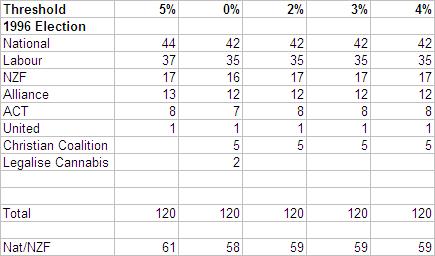 In 1996, having no threshold would have seen the Christian Coalition gain five seats and the Legalise Cannabis Party two seats.

A threshold of 2%, 3% or 4% would all see Christian Coalition gain seats, but not the ALCP.

This would have changed the Government. National and NZ First formed a Government with 61 seats out of 120. With no threshold they would only have 58 seats and would need three more seats to govern.

This would mean either a formal confidence and supply agreement with ACT would have been necessary (and would ACT have supported a Government with Winston in it) or more likely with the Christian Coalition.

In theory one could also govern with both the ALCP and United, but as United is very anti drug liberalisation, this is highly unlikely. 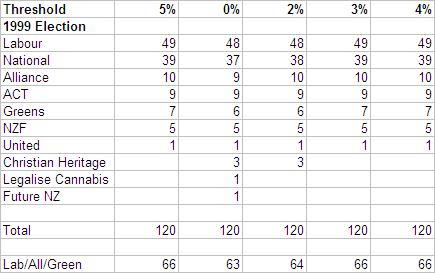 The 1999 election would have seen three more parties gain seats with no threshold. Christian Heritage gets three, ALCP one, and Future NZ one.

The Government formed was Labour/Alliance with support from the Greens. That combination would not have changed, reducing from 66 seats to 63. 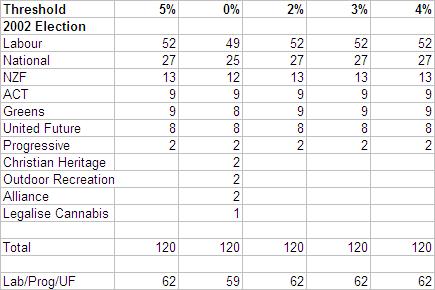 No threshold for the 2002 election would have seen four extra parties in Parliament. Christian Heritage, the Alliance, Outdoor Recreation would have got two seats each and ALCP one.

This would have changed the Government. There was a Labour/Progressive Government with support from United Future that came to 62 seats. With no threshold it would be 59 seats.

Labour at 49 seats would need an extra 12 to govern. The simplest combination would be for them to have gone in with Winston who had 12 MPs. If he was ruled out, then a Greens, Progressive and Alliance combo on the left would be possible but unstable. To stay with the relatively centrist United Future would be difficult as even with Progressive and Outdoor Recreation they would be one seat short. 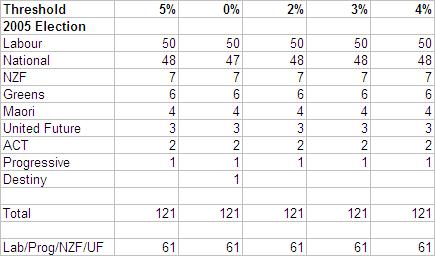 Less change in 2005. No threshold would have seen Bishop Tamaki get a pet Destiny MP, but the four party governing combination would still have had a slim majority. 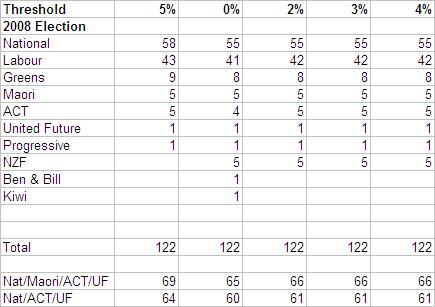 The four party combination would still be able to govern with 65 seats instead of 69. However the Maori Party did not choose National over Labour. It was National or nothing.

The natural CR grouping of National, ACT and United Future has only 60 seats out of 122. You need 62 to govern so even one seat from the Kiwi Party would not be enough at 61.

So the Ben & Bill Party would have held a potential balance of power. They could either go with the centre-right or force a new election due to a hung Parliament.

I doubt many New Zealanders would back abolishing the threshold. Personally I support going to a 4% threshold which is what the Royal Commission recommended.

UPDATE: Chris Bishop has sent me a copy of a paper he did for his an LLB Hons class on the 5% threshold, titled Representation vs Stability. A copy is here – The 5 Percent Threshold in MMP – Representation v Stability. Note the paper was written in an academic and private capacity.

After presenting arguments for and against a threshold, Chris concludes that the principled arguments for representation outweigh the pragmatic arguments for stability. I disagree. Chris said:

Concerns about “instability” are over-stated. By definition, minor parties in Parliament with few seats have as much as power as they do seats (in other words, not very much). The New Zealand electorate does not tolerate minor parties attempting to exercise disproportionate power over major parties.

There are two arguments against this. The first is that Chris sees power too literally as merely votes in Parliament. It is a well documented reality that a minor party able to play major parties off against each other can gain power well beyond their voting strength. They can gain a veto on any controversial legislation, due to the adversarial nature of our Parliament where the main opposition party will not help the Government out often.

The other weakness in the argument is the assertion that the electorate does not tolerate minor parties exercising disproportionate power. This overlooks that very very small parties do not have to care about most of the electorate. So long as they can use (for example) fear and hatred to whip up enough resentment so 1% of the country votes for them, they don’t have to worry too much about the fact 95% of the electorate hates them. So long as they keep their 1% happy, they can be as unreasonable as they want to be if they hold the balance of power.