The Labour Conference appears to have decided not to oppose the MMP referendum (and Simon Power has indicated he will be consulting other parties on how it is run which is commendable) but also want to look at improving MMP, rather than just replacing it.

The present Parliament of 122 MPs has 70 electorate MPs and 52 list MPs.

The number of electorate MPs is based on a formula set out in the Electoral Act that starts with the South Island having 16 general seats.

But there is nothing magical about 16 seats. On the basis of past elections, proportionality could still be achieved by having more electorates – of smaller size – and fewer list MPs.

A move by Labour-affiliated unions at the conference to support the present balance between list and constituency MPs failed.

Hamilton list MP Sue Moroney spoke in favour of the present balance but the argument used was that a reduction of list MPs could reduce the representation of women.

Labour’s representation of women in the north is almost entirely by women on the list because so many Labour women have lost seats.

Mr Parker said there were legitimate concerns about representation of women and minorities. But the other argument was that unless people’s concern that MMP had too many list MPs was addressed, the greater issue, which was MMP, would be put at risk.

There are some advantages and some disadvantages to altering the ratio of electorate to list MPs. More electorate MPs means the size of each electorate is smaller, which is a plus.

However fewer list MPs increase the chances of overhang (which we already have had with the Maori Party) and also gives parties less flexibility in terms of overall composition of their likely caucuses.

One way to deal with the problem of the size of electorates, without crating potential overhang is to simply increase the size of Parliament to 140, which is close to the average for countries of our size. But that is likely to e about as popular with voters as Clayton Weatherston’s defence strategy! 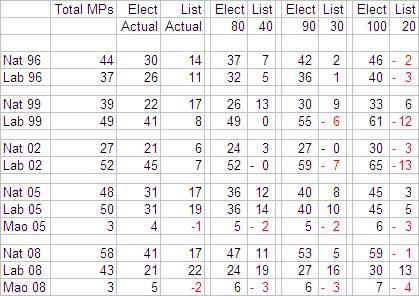 The table above shows the likely overhang we may have had under different electorate/list combinations. It assumes that a party will win the same proportion of electorate seats.

A 100/20 split would have resulted in overhang at every MMP election. In 2002 National and Labour between them would have a 16 seat overhang.

A 90/30 split would have resulted in Labour having a six and seven seat overhang in 1999 and 2002 respectively. It would also expand the Maori Party overhang in the last two elections by one.

A 80/40 split would just avoid Labour or National having an overhang, but would expand the Maori Party overhang. However Labour in 1999 and 2002 would have had no List MPs at all. Some might cheer at no Cullen or Wilson, but having no List MPs does undermine one of the claimed benefits of MMP – the ability to use the list to have a more diverse caucus.

What is important to remember is under current law, the number of electorate MPs increases every census anyway as the North Island population grows faster than the South Island. Already in our five MMP elections they have gone from 65 seats to 70.

So if you went to 80/40, within 15 years it would be 85/35 and overhang gets more and more likely. Even if the status quo is not changed, in around 45 years or so we will probably hit 85/35 anyway and be having overhang problems.

You could remedy this in a couple of ways. One could have the number of List MPs stay constant at say 50 rather than reduce as the number of electorates grows. But that means every five years there would be one or two extra MPs. You could also set a ratio of electorate to list MPs, such as 7:5 – but that would increase the number of overall MPs even faster. However it would keep proportionality.