This is what Chris Carter blogged on the Labour Parliamentary Blog earlier today. He deleted it soon afterwards, but Kiwiblog readers retained copies and sent them in!

Just saw the most awful sight.

John Key was posing outside on the 9th Floor Beehive balcony for a photo op.

He looked just like Mussolini at the Piazzo Navona. I couldn’t resist leaning out my window and calling out to John that he resembled Mussolini.

He responded “IT WORKED!”

Says it all, really.

So Chris Carter saw the “most awful sight”. No it wasn’t landing at Wellington Airport but the PM doing a photo op. And so of course he thought of Mussolini.

Not content with having those thoughts, he felt the need to share with the world how “most awful” it was that he though the PM looked like Mussolini doing a photo op. 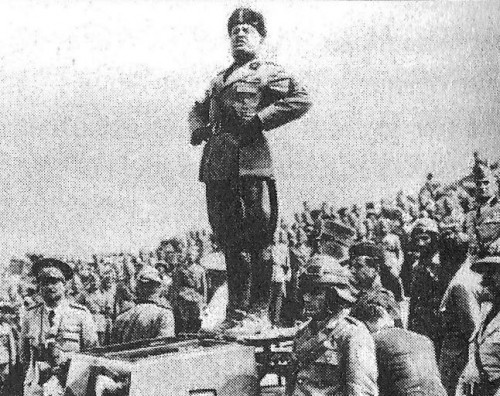 He even took the time to upload a photo of Mussolini to the Labour blog.

And Labour wonders why they are 33% behind in the polls. Obviously some of Chris’ colleagues got the post yanked down as soon as possible, but they should learn that this is the Internet!