Barack Obama is facing all kinds of issues in the US at the moment- healthcare reform, whether to put more troops into Afghanistan, climate change, you name it. All the while, he faces huge expectations on the left and visceral anger on the right.

But one thing he can point to is a stimulus package that  has made some big investments in covers green jobs, extensive social assistance and research. The stimulus package included $21.5 billion in funding for research and development, particularly in leading edge genetic research. The money has been spread around the US, and is having a great effect in encouraging research where private sector funding has dried up.

This is the kind of long term thinking that has been missing from NZ’s response to the recession. Of course we don’t have $21 billion to do this, but our government has set on the sidelines, and worse still pulled back from research funding. If we want to improve productivity and develop a new economy, we need large scale investment. On this issue, the Obama administration is showing the way

While I am all for genetic research (then we can clone Hayley Holt), I think Grant’s drooling over Obama’s fiscal stimulus is rather regrettable. Even if one puts aside the huge fiscal deficit Obama is running (which makes you wonder about how large a deficit NZ Labour is planning), have a look at this graph from Harvard Economics Professor Greg Mankiw that someone linked to in the comments. 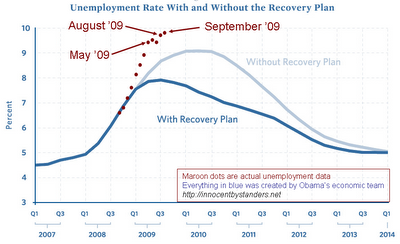 And this is Labour’s solution to rising unemployment!

Incidentally in NZ, where we had a more modest fiscal stimulus, consisting of tax cuts and advancing necessary infrastructure investment, the unemployment rate is just 6.0%. It was projected to peak at 8% (or even 9.8% on the downside scenario), but the latest Reserve Bank forecast is now for it to peak at 7.0%.

Now this doesn’t mean a massive fiscal stimulus spendup makes unemployment go even higher. I am not saying Obama caused unemployment to go higher than projected.

Obama has saddled future generations with an out of control deficit, and debt which will soak up money which could be spent on health or education.

This is what Labour wanted for New Zealand. They have proposed mounds of extra spending that would have stuff all impact on unemployment, but leave a massive debt burden for the future.