Catching up on the last few days, as have had no time to blog.

Wednesday afternoon we visited the Knesset, and were very fortunate to not just have a private tour, but also hosted by the Knesset Chairman, Speaker Reuven Rivlin. We met in his private offices until he had was suddenly summoned to a meeting with the Prime Minister, to be told the PM was recommending a 10 month freeze on settlements. 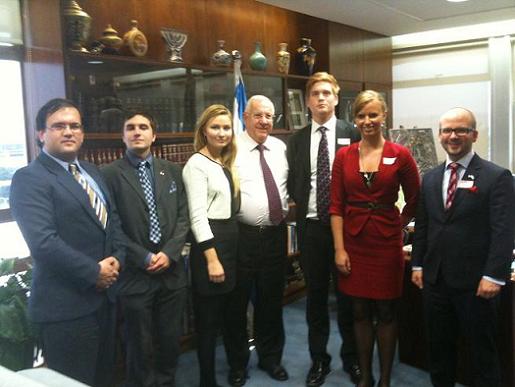 The Speaker with the Swedish contingent, and Davidi (our host from Young Likud).

Rivlin was the Likud candidate for President in 2007, and has a reasonable chance of becoming President at the next election. His family have resided in Jerusalem since around 1800.

Just as Israelis are very proud of their Supreme Court, they are also proud that they have a universal democracy. There are no electorate seats in Israel – it is proportional representation for every party that gets over 2%. The threshold used to be 1%, then 1.5% and now is 2%. Some advocate it should keep going higher to prevent the small extremist parties. There are 18 parties in the 120 member Knesset, but they stood under 12 lists only.

Of the 120 Knesset members, 13 are Arabs. Some of them have been elected Deputy Speaker, and one has served as Acting President.

We also went and observed the Knesset in session. It is quite different to the NZ Parliament. The MK speakign does so from a platform next to the Speaker. The MKs themselves sit in four horseshoes (in the shape of the symbol on their coat of arms – its formal name escapes me).

Their debates are not just confined to passing laws (as NZ is except for question time and general debate). They debate many varied issues every day. However where it is like NZ, is that few attend at any one time.

The visitors gallery is behind soundproof glass. We were told that no matter what we said, no one would hear it. I was tempted to jump up and start yelling out Allah Ackbar to test that assertion, but luckily my common sense won out that this would be a very bad thing to do 🙂

The artwork in the Knesset is stunning – some of them took a decade to complete. It is a building well worth a tour.

As I mentioned in my NBR column, I was surprised at the degree of pragmatism I encountered amongst some of the politicians. You realise after a while that so called bottom lines are initial negotiating positions. We saw that the day we were there with the freeze on settlements (which is a good thing).

After the Knesset we had a meeting with Yigal Palmor, who has one of the more difficult jobs in Israel – he is the Spokesperson for the Foreign Affairs Ministry. Again fascinating discussions about prospects for peace agreements, and it was during that discussion the idea of both Israel and a future Palestine being part of NATO (to guarantee secure borders) was discussed.

I asked if the settlement freeze will make his job easier, as it will be popular internationally and he (correctly) predicted that the Palestinians would reject it as inadequate. He stressed the US reaction is very important. Paraphrasing, if the US supports Israel on something, then most of the rest of the world will offer mild or muted criticism only. But if the US itself is critical (even mildly), then Israel will face harsh denunciations around the world.

We also have two impromptu meetings in the streets. One was with the Deputy Mayor of Jerusalem. He is a very close friend of Davidi, the Young Likud Chair, despite the fact he is also the Young Labour Chair.

We also ran into Davidi’s former army commander. He is now a General, and his job is head of counter-terrorism for the Armed Forces. Only had a brief chat to him, but we had dinner the next night with a former Deputy Chief of General Staff, who was in charge of the Northern Command.

A very interesting day all up.