FLAGS WERE in the air last week, and so was nationhood. Maoridom chose its Waitangi Day Flag by a big majority, but discontent with the New Zealand flag, with its conspicuous Union Jack in one corner, has been simmering for years.

So the Sunday Star-Times asked a handful of experts to design a new flag. Today we reveal fascinating new designs by artists Billy Apple and Dick Frizzell, by former ad-man John Ansell, who designed the famous “IWI/KIWI” National Party billboards in 2005, and by Wellington graphic design company Base Two.

Now John has six different versions of a fern flag on his blog site, and you can vote on your preferred designs. 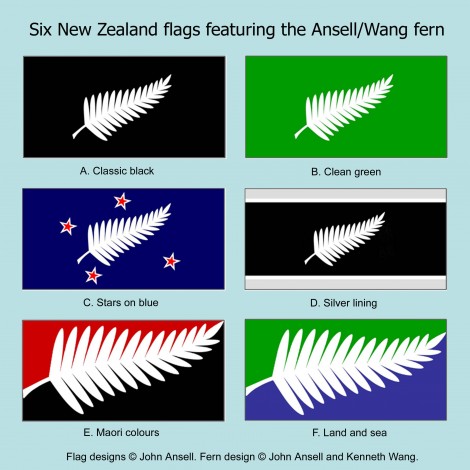 My favourite is the classic black. Second equal would be versions E and F. The split colour looks quite good.

I’ve just voted, so go over to John’s site and have a vote also.