Claire Trevett at the NZ Herald has what looks to be a scoop:

Wanganui is to be given its “h” back in a compromise under which Government agencies will have to follow the new spelling but others will have a choice.

Land Information minister Maurice Williamson will visit Wanganui today to announce his decision on whether it will become Whanganui.

This follows a sometimes-acrimonious public debate on the issue and a Geographic Board recommendation to insert the “h”.

The Herald understands his solution will be similar to the compromises that created Aorangi/Mt Cook and Mt Egmont/Mt Taranaki, making Wanganui and Whanganui official names.

Sounds fairly sensible. I have previously blogged that a recommendation of the Geographic Board should only be declined by the Minister if there is some failure on their part to consult properly. 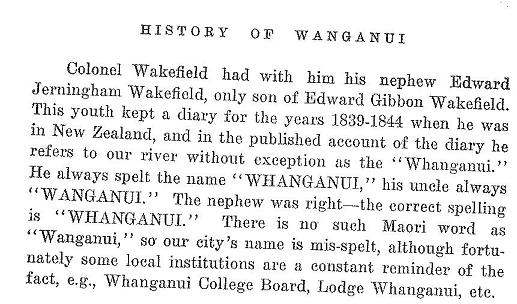 Incidentally I was e-mailed this yesterday by a mate. He mentioned at the Press Gallery party that he had just been reading a 1938 history book which pointed out the name Wanganui was a mis-spelling, so this issue is not some new retrospective rewriting of history. I asked him to e-mail me a scan, which he did.

Anyway we’ll find out around midday what the official decision is.