The recession may technically be over, but it sure as hell has a nasty sting in the tail with the December quarter unemployment rate hitting 7.3%.

The worse case scenario is that we are barely out of recession at 0.2% quarterly growth, and unemployment may rise more in further quarters. That will add to the pressure on the Government to “create jobs”, even though in reality it is the private sector that creates job. The role of the Government is to have the economic environment optimised for job growth.

One can advocate the Government “creates” jobs by increasing spending. However when we are already borrowing $240 million a week just to keep current spending going, I don’t think greater borrowing is the answer. The answer is higher levels of economic growth.

Let’s look at the numbers for the quarter:

Now I want to look specifically at youth unemployment: 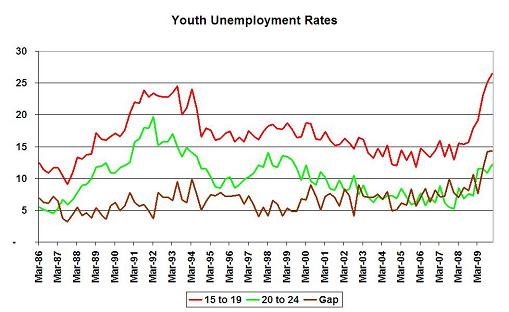 This graph shows unemployment rates for the two youngest age groups. Those aged 15 to 19 and those aged 20 to 24. Traditionally the 15 to 19 year old group does have higher unemployment, reflecting their lacks of skills and experience. But the brown line shows that the gap between the two age groups averaged 6% from 1985 to when youth rates were abolished in 2008.

But currently, the gap is a whopping 14%. And I do not think it is a coincidence. Young New Zealanders have been priced off the workforce. The impact of this recession on 20 to 24 year olds is much less severe than in 1991, but the impact on under 20s is more severe.

It is also common sense. A 15 year old or even 17 year old is often not worth $12.75 an hour (let alone $15 an hour). At that age what they most value is being to have a job at all, so they gain skills and experience. This is what will help lead them (along with education) into higher paying jobs.

Abolishing the youth rates for the minimum wage is not responsible for the overall level of unemployment – that is the lack of economic growth due to the recession from Jan 2008 to Mar 2009, and the weak growth since.

But I think there is a strong case for the abolition of youth rates is responsible for why under 20s have been hit so much harder by the recession than any other age group.