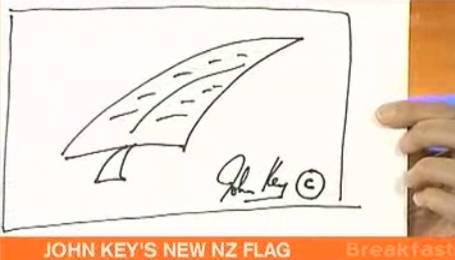 TVNZ have just put out a PR saying:

Prime Minister, John Key was asked to draw his version of an alternative NZ Flag by TVNZ’s Pippa Wetzell on Breakfast at 7:15am this morning.

By the time the programme went off-air at 9am, TVNZ had received many pledges of money for the A4 sized doodle, the highest being $1000.  Mr Key gave his consent for the drawing to be auctioned for charity and it has been listed on Trade Me this afternoon with all proceeds going to the children’s charity, Cure Kids.

I have to say Pippa has the more accurate description. But at least John drew it himself!

The interview Breakfast interview is above. Will be nice if bit of fun during a TV interview can raise some money for charity.