NewstalkZB at 8 am reported Len Brown saying supportive things about Andrew William’s bid to be on the new Auckland Council. The item said:

Len Brown is showing his support for Andrew Williams intention to stand for election onto the new Council.  …

Manukau City Mayor Len Brown says he has worked well with Mr Williams in the past through the Mayoral Forum, and knows he has his community’s concerns at heart.

They also reported John Banks refused to comment – a much wiser strategy.

So far then, Len Brown has endorsed or said supportive things about both Sue Bradford and Andrew Williams being on Council.Is there anyone he won’t endorse?

I mean this is just after Williams puts up on his Facebook page a photo of Rodney Hide as Hitler (H/T: Whale). 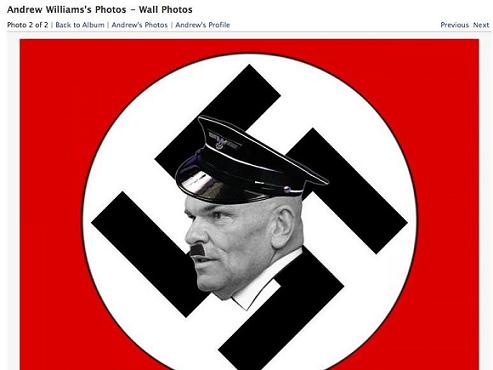 Yes this image really is on the Mayor of North Shore City’s Facebook page – placed there by him.

Do I really need to even mention how offensive this is to actual survivors of the Holocaust. You might expect this behaviour from an anonymous troll on the Internet, but not from the Mayor of a major city.

And this is who Len Brown is supporting for Council – because he didn’t want to risk having Williams attack him, if he refused to say nice things about him.

This is one of the criticisms I hear about Brown. From all accounts he is a very nice guy, and quite personable. Someone you would find hard to dislike. Many people I know, from both National and Labour, say Len is a really nice guy.

But the criticism is whether he is tough enough to handle the job of being the inaugural Mayor of the Auckland Super City. You have to be able to sometimes call a spade a spade.

The job will involved both standing for 1.3 million Aucklanders to the national Government, but also being able to run a Council focused on regional issues and not be captured by the parochialism of the past.

And this is why Andrew Williams is unsuitable, in my opinion, for the Auckland Council. Even if you put aside his abusive and ranting style, he is also unsuitable because he seems only concerned with his local area – not Auckland as a whole. Of course you want ward Councillors to represent their communities, but you most of all want them focused on decisions that are good for Auckland as a whole.

It is almost impossible to see how anyone can think Williams would be a constructive member of the Auckland Council, and it does call into question Len Brown’s judgement, that he is effectively endorsing Andrew Williams.