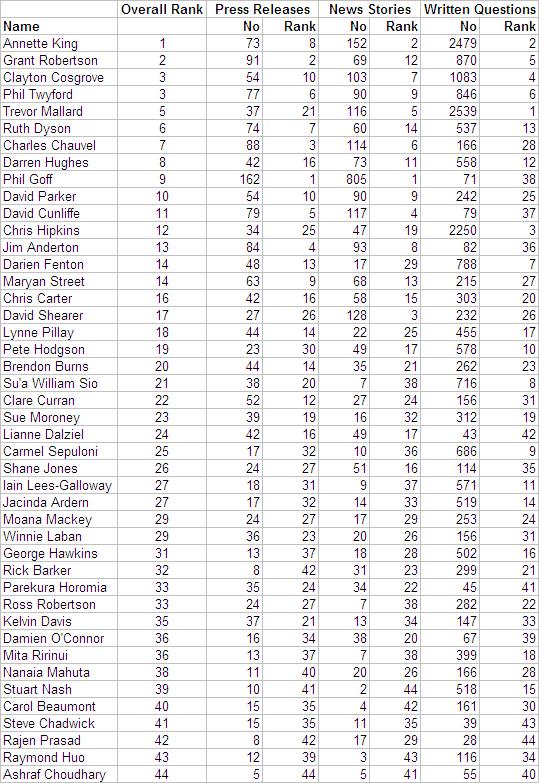 I’ve done the above table ranking the productivity of the 44 Labour MPs, in 2009, on three criteria. They are:

So you can see the output and rank for each category, plus an overall rank based on an average of the three category ranks.

To some degree the three categories represent inputs, outputs and outcomes. The written PQs are the inputs – the grunt work you do to find out information for your portfolio. Some MPs actually abuse the facility, but overall it is a reasonable indicator of activity.

The media releases are the outputs – how often an MP is actually putting a statement out there for the media to pick up.

I have not surveyed the number of oral questions they ask, or the number of speeches in the House. The reasons for this is that the leadership tend to allocate these out or roster people on for these. It is not the same as MP generated activity.

People may wonder why I have only done these for Labour. Well Government backbenchers are not actually encouraged to do press releases (except on local issues) or ask PQs. It is only for an Opposition party, these stats make sense. I did a similar survey of National MPs in 2008.

So what do these stats tell us, starting from the bottom:

Having said that, there is some correlation. MPs seem as future Ministers such as G Robertson, Twyford and Chauvel are in the top ranks, while I don’t think anyone is betting money on when Ashraf Choudhary will become a Minister!

I’ll update these in early 2011, and people can see what changes, if any, there has been.