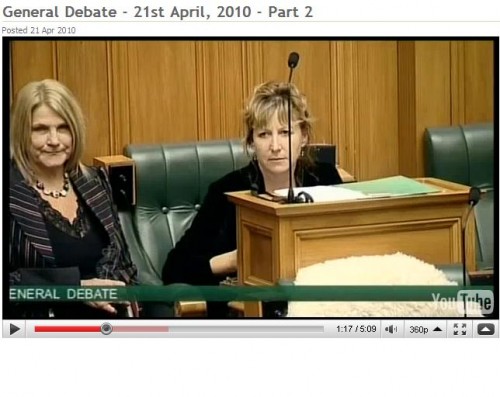 The now infamous Curran death stare [Clare herself says the correct term is the Clare Glare :-)], directed at Gerry Brownlee during his general debate speech on Labour’s branding document.

The best story on the branding comes from Fran Mold on One News.

As they ask whether Labour’s brand is more futuristic, they stick up footage of George Hawkins, Trevor Mallard, Parekura Horomia and Pete Hodgson.

Then best of all, when asking whether the brand should be more reliable and honest, they show footage of Taito Philip Field being asked to plead in court. A nice reminder that Labour have never ever apologised for his corruption, let alone their defence of his corruption.

And they also show the Hodgson and Mallard dance moves, when asking if they should go for more funky.

Finally as a backdrop to them being more cool, they show the Caucus singing along on a bus. Wonderful.