Auckland Girl and I went to the première of Eating the Dog by Te Radar at Downstage last night.

It was a wonderful stroll through obscure tracts of New Zealand history, and we spent most of the evening giggling and laughing away. I can’t think of many people who wouldn’t enjoy it, and if you love learning about obscure history you’ll love it. 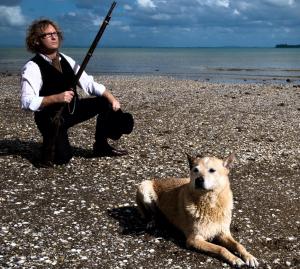 Te Radar was excellent. Physically he looks like a ginga-lite version of Carrot Top (the las Vegas comedian). He was dressed to match, and kept the audience engaged through out. While he is a comedian, he wasn’t telling jokes. What he did is effectively take people through a powerpoint history of some amusing and obscure parts of NZ history, with great enthusiasm for the wonderful Kiwi attitude.

It was not comedy of the laugh so hard your ribs hurt type. But it was very funny – there is a wealth of material to laugh at.

I was genuinely fascinated by the history that has been lying around in our regional museums. The Taranaki highwayman of the 1890s was a most unlikely criminal. You can only applaud the former Cromwell Mayor who upon hearing of a vote of no confidence being passed in his absence identified the mover, locked the Council doors, whacked around the mover and then asked who the seconder was. As no one put their hand up, he declared it could not have been a valid motion.

The gold mining submarine was also fascinating, and I intend to view it the next time I am in Middlemarch.

The favourite part had to be the relatively well known Bob Semple tank built from corrugated iron. They reminded me of the 2004 Killdozer.

The play is on until the 10th of July. I thoroughly enjoyed it.