Whale Oil has these two nice graphics, which I can’t resist pinching. 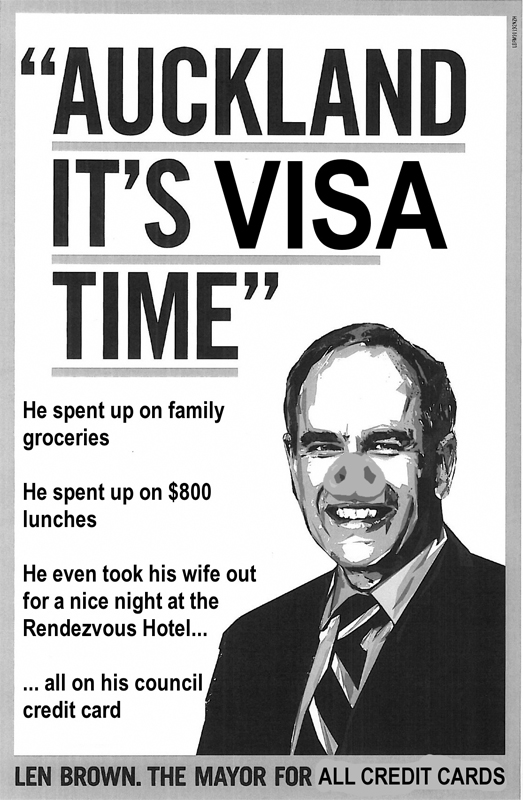 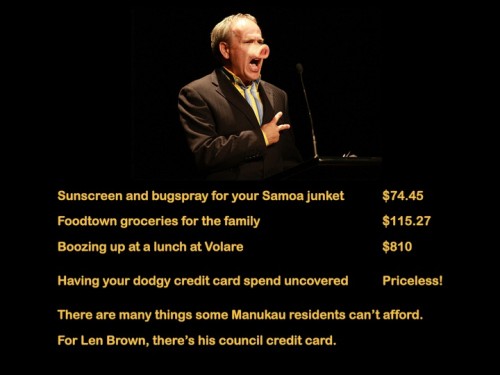 Councillors Dick Quax and Jami-Lee Ross are calling for a full review of Mr Brown’s mayoral credit card usage after it was reported that he had purchased family groceries, a stereo system, and paid to take his wife to Auckland’s Rendezvous Hotel with his ratepayer funded credit card.

“It is important for the mayor of a large metropolitan city to show judgement when spending ratepayer funds,” said Mr Quax.

“He is a lawyer and mayor. There is no excuse for him not to know that taking his wife to an up-market hotel on the ratepayer tab, and buying the family groceries with a ratepayer funded credit card, is wrong.

“Mr Brown may have since paid some money back, but purchasing personal items in the first place is highly questionable and undoubtedly against council policy,” says Mr Quax.

Jami-Lee Ross, who is also chairman of the Manukau City Council Accountability and Performance Committee, says he will be asking the Council Chief Executive for a full report on mayoral credit card usage for the last two years.

“There should be no personal spending of any kind being charged to a credit card funded by Manukau City ratepayers,” said Mr Ross.

“The Council and community need to have confidence that Mr Brown is not abusing his ratepayer funded credit card.

“I am particularly concerned over reports of a number of purchases at restaurants and bars not being itemised,” said Mr Ross. ”In light of other personal spending taking place it is reasonable to expect a proper explanation for any food or alcohol being purchased.”