I am a big fan of Sir Roger’s policies. I regard him as the second best finance minister New Zealand has had.

So it is with trepidation, I scrutinise the figures he uses in his brochure below. 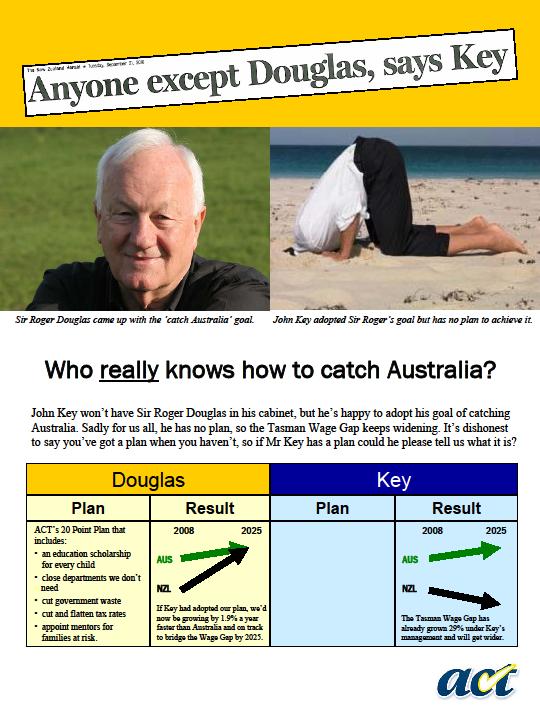 I’ll even leave alone the wisdom of claiming a specific level of economic growth, on the basis of proposed policies. All I’ll say is if you are that good at predicting economic growth, you could make a lot of money on iPredict!

The figure I am interested in is the claim “The Tasman Wage Gap has already grown 29% under Key’s management”.

In September 2008, the gross average weekly earnings in NZ were at 85% of Australia’s. So you see a claim of the gap growing 29% and you think, hell we must now be 56% of Australia.

Before I get to how Sir Roger got his 29% (a classic example of correct yet misleading), I’ll also point out that Sir Roger is only comparing before tax wage rates. As a proponent of lower taxes, I am surprised he does not compare after tax wages – because they would show that in face NZ has closed the gap.

But I regard talking about a relative change as a percentage is quite misleading. It may be technically accurate, but it is deceptive. Let me give two examples:

If you look at the position of the arrows it clearly gives an impression of a massive increase in the gap – not a 2.2% change.

The pamphlet would be more defensible if it said that NZ has gone from 85% to 82.8% of Australia.

And the arrows should show both going up – NZ by 7.1% and Australia by 10.0%. Not one going down massively, and one going up massively.

Now I may have interpreted Sir Roger’s calculations incorrectly. I would be happy to have provided how he calculated the 29% – but I am pretty sure is is talking about relative change, rather than absolute change.