Mr Brown, the Mayor of Manukau, who has supported the campaign of the charged candidate, yesterday said he was disappointed with the accused and anyone else who abused the democratic process. 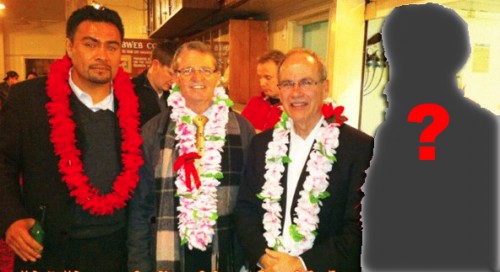 Was he disappointed enough to ask the candidate to stop using this photo of Len Brown, with him, on his election pamphlet?

But Judge Simpson was forced to grant interim suppression when the man’s lawyer, Howard Lawry, said he would appeal against her ruling.

The identity of the Super City candidate will be kept secret until the appeal can be heard in the High Court. The Herald will join the police in opposing the suppression application.

On behalf of the police, Crown prosecutor Robin McCoubrey opposed suppression for the candidate. He said there was strong public interest in the name of a person accused of fraudulent activities affecting the electoral roll.

Mr Lawry said naming his client, who is presumed innocent until proven guilty, would jeopardise his chances in the election.

Mr Lawry said that if his client’s name was suppressed, the position of other candidates was protected.

This was because if he were elected, then found guilty as charged, the election result could be revoked.

Not really. There is no provision to revoke an election result if a candidate after the election is found guilty.

One can do an electoral petition to have an election declare invalid, but these must be lodged within 21 days of the result. There is no way any trial will be concluded in that time.

Sadly, by appealing, the name remains suppressed until Thursday afternoon probably, and by then it is too late to mail your vote in.

UPDATE: A reader points out that if the accused is elected, and found guilty of a crime carrying a maximum sentence of two or more years jail, then they forfeit their seat.