The Republican Presidential Primaries will be held in early 2012, and there is huge jockeying for position already. Obama has relatively low approval ratings but nearly two years out from the presidential election these count for little.

In 1982 Ronald Reagan, now considered one of the most popular politician of all time, faced a tough economy and a democrat controlled congress. As the chart below from USA Today shows, Obama is clearly ahead of where Reagan was at the same time in his presidency.

This is a fascinating tracker poll. You can track any president against any other using the compare chart.

Tracker polls like this are interesting because they point to historical precedent. So when the media start talking about low approval ratings for Obama it pays to be skeptical as to how much influence this has on his reelection campaign. 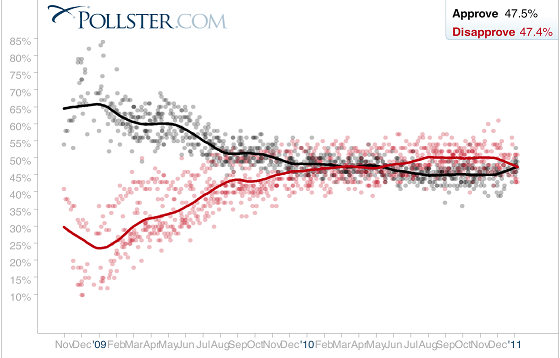 Also worth noting that Obama’s approval is on the rise.