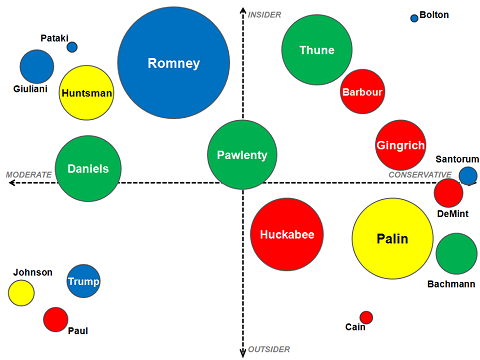 Five Thirty Eight have done this very useful graphical representation of the GOP potential candidates (none have yet formally declared).

The size of each bubble is related to their current chances to win on Intrade. The colours are what region they come from, and the two axises are labelled.

I’ve had the view for a while that Pawlenty could win the nomination, as other candidates get knocked out, and this graph shows he is positioned quite well. Being an insider helps in some regards but if you look like a total insider, then grassroots support may be harder to get.

Romney’s major problem is he is seen as not conservative enough.

Haley Barbour is in a pretty good position also, and could do quite well. Time will tell.