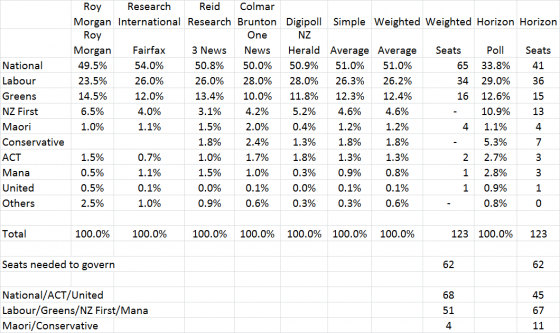 This is a summary of the polls released this week. You can click on it for a larger version.

People should be aware of the commentary with the final NZ Herald poll:

Today’s poll also throws up a bizarre possible outcome – National winning more than 50 per cent of the party vote but still needing Act, the Maori Party or United Future to give it a majority in Parliament.

This could happen if today’s poll results were translated to votes.

The revival of New Zealand First – which National won’t deal with – could make the survival of Act crucial.

The Maori Party could be in the box seat to negotiate a confidence and supply agreement to give National a cushion of comfort if Act and United Future don’t make it.

If today’s poll figures were translated to votes, United Future, the Maori Party and Mana would get more electorate seats than their party vote entitlement.

When that happens, the size of Parliament expands beyond 120 seats, and the parties are allowed to keep the extra seats.

In this case, the “overhang” seats would take Parliament to 126 seats.

In that scenario, a Government would need 64 seats for a majority and in today’s poll, National would have 63 seats – based on the assumption that Act, Mana, United Future and the Maori Party will keep their electorate seats.

Only Act and United Future have pledged to support National.

MMP does not always deliver proportional results. As the Herald says, one could have National get over 50% of the votes, but lose power.

The Conservative Party have not said they will back National. Do not think a vote for them, or a vote for Craig, is a vote for John Key to remain Prime Minister.

It should not be assumed the Maori Party would back National if they hold the balance of power. They have more policy in common with Labour, and would be more likely to retain their seats in 2014 if they go with a centre-left Government.

Despite the fact the average of the polls show Phil Goff is leading Labour to their lowest ever vote share, the way MMP works means he can still emerge Prime Minister. National would never say yes to the huge spending demands that the Greens, and Winston would demand for supply and confidence.

People may also wish to think about how they will vote in the referendum, based on the scenario outlined by the NZ Herald that MMP could deliver government to Labour on 28%, even if National gets 51%. Do you want to lock MMP in as our electoral system for the next 50 years, or do you want to vote to have a referendum in 2014 pitting MMP against the most popular alternative?

Have a look at what John Key and Phil Goff are saying on the referendum, and decide for yourself.

UPDATE: The original version did not include the Roy Morgan poll released overnight. This is now included.