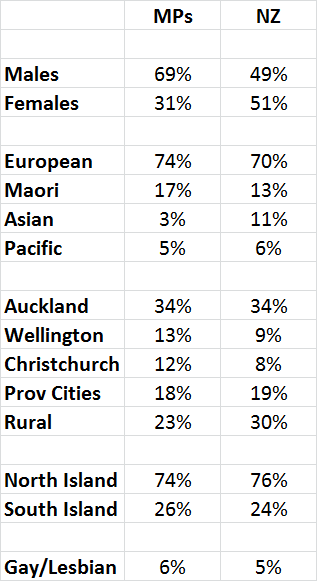 The Herald did a story yesterday based on my analysis, and said it showed there was little diversity in Parliament and the average MP was a straight, European man from the North Island aged in his 50s.

In fact only 10% of MPs are straight, European men from the North Island aged in his 50s. Five average characteristics do not make one overall average.

With the exception of gender, I think Parliament does quite well on the diversity stakes, as is shown above. I have excluded age from this comparison as I don’t think anyone really thinks that Parliament should have 21 MPs aged in their 20s and 20 MPs aged over 65.

On gender, there is a serious imbalance. Later on, we’ll look at the breakdown by party.

Geographically Auckland and provincial cities are pretty spot on. However Wellington and Christchurch are over-represented at the expense of those who live outside a city.

The number of gay/lesbian MPs is also pretty proportional. There is no definite prevalance rate for gay and lesbian adults, but 5% is generally regarded as in the ballpark. In times past 10% was often cited, but this is now thought to be too high.

So as I said overall, I think Parliament does quite well on the diversity front. Now let us look at the breakdowns for the four main parties. 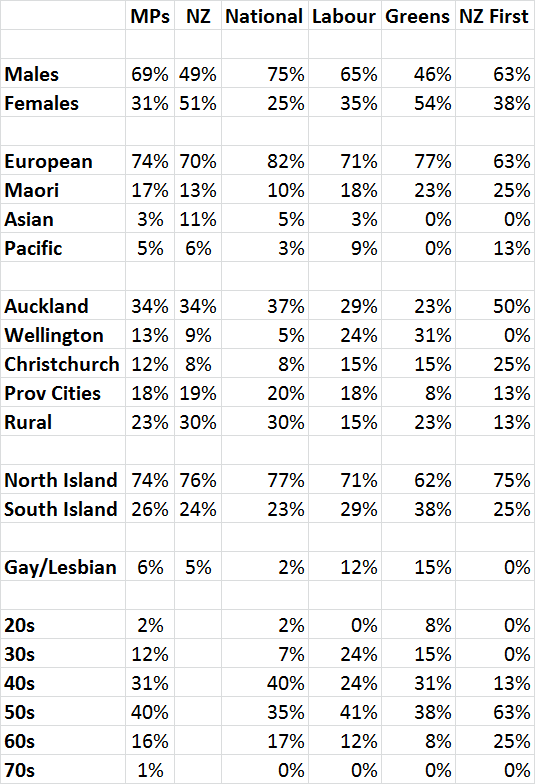 In terms of gender, the Greens are broadly balanced (their rules require it), Labour and NZ First have a 2:1 ratio for men to women and National a 3:1 ratio. National does need to select more women in winnable seats or in winnable list spots.

13% of the adult population is Maori, and 10% of National’s caucus if of Maori descent, 18% of Labour’s and around a quarter of the Greens and NZ First.

5% of National’s caucus is Asian, as is 3% of Labour’s. No Green or NZ First Asian MPs.

In terms of geography, NZ First is very Auckland dominated, and the Greens relatively light.

Labour and the Greens both have heavy Wellington biases with three times as many MPs from Wellington, as you would expect from the population. Conversely NZ First has no Wellington MPs and National only 5% from Wellington.

The Greens do badly in provincial cities. In rural areas (outside cities), National is the only party with proportional representation. Labour and NZ First have less than half what the population share is.

Based on island, the Greens are out of kilter with only 62% in the North Island where 74% of the population live.

By sexuality, National’s rainbow representation is just 2%, Labour’s is 12% and the Greens at 15%. NZ First have none (known).

Finally, there are some interesting age patterns. National’s most common age is in the 40s. Labour’s most common is 50s, Greens also 50s and NZ First 60s. Labour have a lot in the 30s also.In terms of median ages it looks like NZ First is the oldest and Greens the youngest.