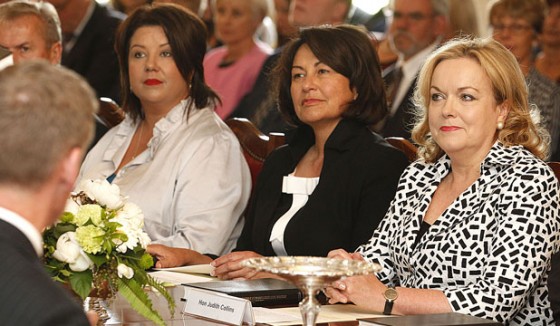 I like this photo (from Stuff) of the Ministers being sworn in. I like the fact that a third of the front bench are woman (and two are Maori women) and indisputably all there on merit – not on the basis of quota or factional appeasement.

I also likes this response from John Key to David Shearer’s call to be on the Ministerial committee on poverty:

Mr Key wished new Labour leader David Shearer all the best in what was a “thankless” job as leader of the Opposition.

Mr Shearer had been “quite quiet” as an MP so it was difficult to tell how he might perform.

However, he rejected Mr Shearer’s call to widen a ministerial group on poverty to all MPs.

“I’m more than happy for David Shearer to be a part of the ministerial committee if he’s happy to give the Government confidence and supply.”

On the serious substantive issue, both John Key and David Shearer would sincerely like to see less poverty in New Zealand. They agree on the aim, but the reality is National and Labour disagree strongly on the solutions. This is not always a bad thing – it means NZers get to choose whose policies etc they prefer.

One could argue shouldn’t we do both. Well, yes you can but the policies are not that compatible. The more you pay people on welfare, the harder it generally is to reduce the numbers on welfare.

Ultimately it is of course a bit of a balancing act. Few advocate abolishing the welfare state and having a Singapore system where families must support those not in work, rather than the state. And likewise few support having a welfare state where work is voluntary and you can just go on a benefit whenever you feel like it.