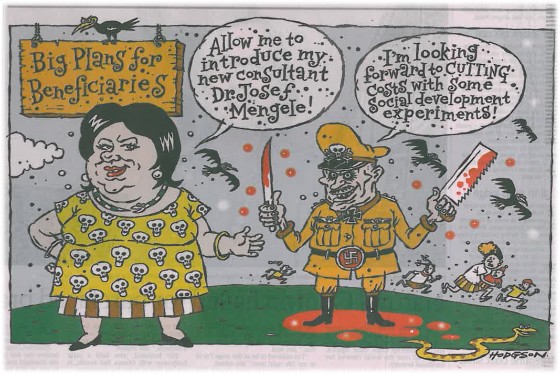 Paula Bennett has proposed that taxpayer fully subsidise contraception to beneficiaries, on an entirely voluntary basis.  A policy which also happens to have widespread support. One can debate the pros and cons of it in terms of effectiveness, but it is a quite middle of the road proposal.

This of course is compared to Josef Mengele who was Chief Medical Officer at the Birkenau and later Auschwitz extermination camps. Mengele once ordered the gassing of 750 women because their block was infected with lice. Mengele also injected chemicals into children’s eyes to try and change their eye colour, amputated limbs for no medical reason, sterilized girls against their will, killed twins so he could dissect them, had two twins sewn together to try and conjoin them.

Cartoonists enjoy a wide latitude by their editors. This is how it should be. But there is a point at which an editor should say a cartoon is so offensive they do not wish to publish it.

The Dominion Post has made a grievous judgment of error in publishing that cartoon, and at a minimum owe an apology to Paula Bennett. There is no room in our political discourse for comparing MPs to Nazis, especially Josef Mengele.