It is very rare to have two major conscience issues in two days. The downside is it is exhausting. The upside is it means even more analysis! I’ve done a table showing how each MP voted on both issues.

I’ve applied labels of “liberal” for those who voted for marriage equality and 18 purchase age (on 1st or 2nd ballot). Yes I know I said you can be conservative and vote for same sex marriage. Labels are never wholly accurate. It’s just a convenient term in this case – not a tag for life.

Those who voted against marriage equality bill and for a 20 purchase age get the “conservative” label.

So, applying the normal analysis to the Parliament, we have: 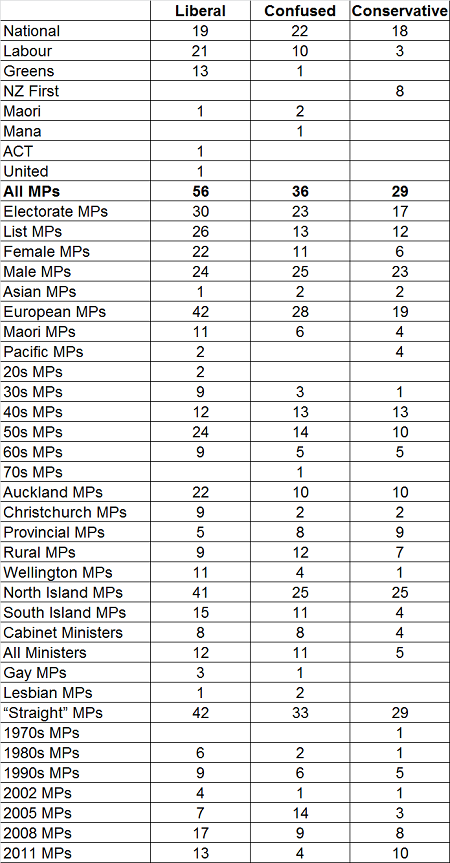 So overall 56 MPs voted “liberal”, 29 MPs “conservative” and 36 MPs were “confused” or as they might call it, moderate 🙂

What demographics stand out?

Electorate and List MPs are roughly equally liberal and conservative.

European and Maori MPs are more liberal than Asian and Pacific MPs.

MPs aged in their 40s are more conservative then those both younger and older than them.

Wellington and Christchurch have almost no conservative MPs – just three out of 28.

The Cabinet has eight liberals, eight confused and four conservative.