Clybourne Park at Circa was a superb night’s entertainment. There were so many things I loved about it, it is hard to know where to start.

Let’s start with the play itself. It’s got two acts (total time 2 hrs 20 minutes with an interval) set 50 years apart – 1959 and 2009. Both acts are set in the same neighbourhood and are about the tensions that arise when a couple buys a house in a Clybourne Park , a neighbourhood exclusively of a different race. In 1959 it is a black couple buying a house in an all-white neighbourhood and in 2009, Clybourne Park  has become all-black, but with gentrification a white couple is moving in.

The play, based loosely on actual historical events, has won four major awards. They are:

So with a play of that pedigree, it turns on how well Circa would implement it. Well they have been on a real roll lately, and this was no exception. 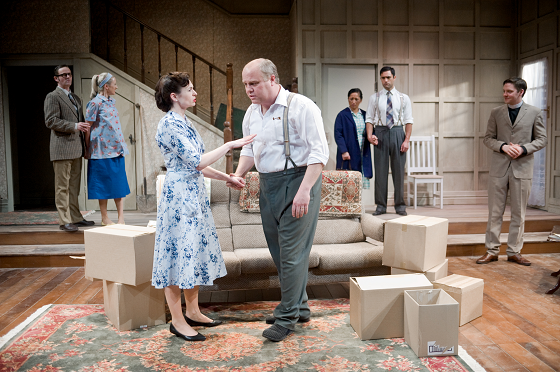 The first act focuses on Russ and Bev. They are packing up to move house. Their black maid Francine is there also. Russ is  a mixture of depressed and angry since his son killed himself after serving in Korea. The allegations that he killed civilians were too much for him.

Nikki MacDonnell stands out as Bev. She captures that 1950s domestic wife perfectly. Rather like Bree from Desperate Housewives she is so concerned about appropriate behaviour, and being a the good wife. She absolutely nails the role.

Gavin Rutherford also shows his versatile skills as the brooding Russ. You can see him on the point of exploding several times, and when it finally comes you almost want to applaud.

Paul Waggott and Andrew Foster play the local priest Jim and local Rotarian Karl. Karl’s wife Betsy is played by Danielle Mason. The character is deaf (and pregnant) and Mason is so convincing in the role that P Girl and I debated at the interval if she was deaf in real life. A different character in the second half made it clear she was not. But the fact she was so convincing we thought she might be, speaks volumes to her ability.

The 7th character is the first act is the well meaning husband of Francine, Albert. He just wants to help. Jade Daniels plays Albert, and his 2nd act character is similar. Both smiling nice guys – but we see in Act II that he has another side.

The drama is around when Karl tells Russ and Bev that the land agent has sold their place to a black couple, and try to pressure them to renege on the sale. You almost wince as phrases along the lines of folk being equal but different are used. And it gets really uncomfortable when the black maid is asked by the others if she agrees that black people are happier in their own neighbourhoods.

Russ though responds badly to the pressure, and it gets explosive when Karl threatens to tell the buyers about he suicide in the house – thinking that will scare them off.

The first act was very dramatic, but also had lots of laughs.

In the second act they all play different characters, but with some links to the original characters.  Both Nikki MacDonnell and Gavin Rutherford do quite increedible transformations. MacDonnell goes from being a matronly housewive in her 40s, to a trendy yuppy lawyer in her late 20s. You almost wouldn’t think it is the same actor. Likewise Rutherford becomes a grimy more youthful labourer who unearths a trunk which links the two acts together.

I won’t give away too much of the second act, but it was at times side splittingly hilarious. It starts with no tension at all, but eventually it is all laid bare as first the prospective purchaser is challenged to repeat a (not very funny) joke about blacks. Nancy Brunning’s character then responds with a joke which starts with “How is a white woman like a tampon”. The answer had me almost off my chair convulsed with laughter.  The joke fitted one of the characters perfectly.

One of the actors told me after the show that on their “test” night on Friday, the audience was predominantly elderly (as tickets are cheaper) and the response to the joke was more shocked. They were pleased to see the audience on Saturday night responding far more better to the joke. After the initial shock, almost everyone was laughing.

I have to praise the set also. It was one of the largest I have seen at Circa. The nice thing about Circa One it has so much room, and they used it to make the house very lifelike and real. During the interval some smart changes saw it transform into the modern version.

It really was a great show. A clever plot deals with sensitive issues of race in a very politically incorrect way. The drama and tension is punctuated with heaps of laughs. Clybourne Park has been my favourite show so far this year. Absolutely recommended as great theatre, so long as you are not easily offended.

John Smythe at Theatreview has reviewed the play also. His conclusion was:

If you only go to one play this year, this should be it.