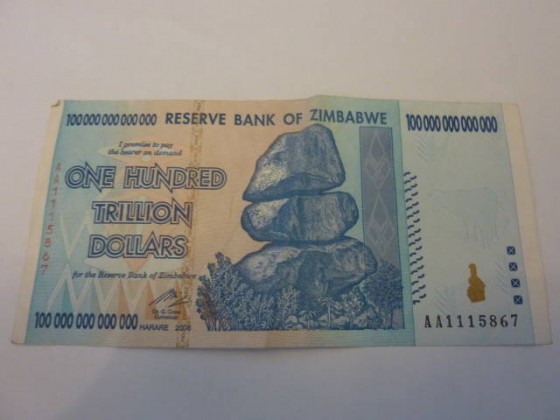 Brb, just getting a wheelbarrow to carry my notes to buy a loaf of bread!

Matt Nolan at TVHE blogs a very useful analysis of what the Greens have proposed (and Labour are semi-supporting):

Russel Norman is completely misrepresenting QE by saying that the recent crisis is “evidence it isn’t inflationary”.  QE was put in place to fight the fact that policy was too tight overseas, and they were trying to fight deflation – in essence the fact that inflation stayed near the “target band” in these countries is evidence that QE is indeed inflationary as you would expect … just in the way they were intending.

Exactly. QE can be considered if you face deflation, and your official cash rate is as low as it can go. We are within our target band at 1% (which is what I think we should be aiming for) and the cash rate is 2.5%.

Remember how often Greens and Labour complain about increased costs such as electricity and food? Well this is a policy to increase their costs even more for families finding it hards to make ends meet.

Now you may believe we should fund the rebuild with a one-off tax – that’s fine, in that case get the government to put a tax in place directly (or to directly cut spending from other place).  However, taxation by stealth of this sort is likely to be worse in multiple ways:

That is a very good way to put it – the Greens have proposed an inflation tax – one that will hit fixed income households the hardest!

The Greens, and Ganesh Nana, are wrong in stating that the RBNZ has failed.  Distinctly and totally wrong.  Things like this:

”No system of monetary policy is perfect and New Zealand cannot remain the last devotee to a failed monetary theory while the rest of the world moves on,” Norman said.

Paint a complete and utter misrepresentation about the lessons from the Global Financial Crisis.  Our flexible inflation targeting framework saved us from a massive crisis at home – while the rest of the world fell apart.

Say no to the Green’s inflation tax.

Oh you must watch the video also, H/T Whale.

John Clarke as hilarious as always. He is also factually correct in this case.