At the start of a three-day trip to Southeast Asia, President Obama said at a news conference in Bangkok on Sunday that Israel has a right to defend itself.

It’s funny how weeks and weeks of missile attacks on Israel rarely warrant even a minor news story. It is only when they strike back that the world’s media give it 24/7 coverage!

But, the president added, “we are actively working with all the parties in the region to see if we can end those missiles being fired without further escalation of violence in the region.”

No doubt many from the safety of their homes, advocate that Israel should do nothing about rocket attacks on them from Gaza. Maybe they believe that they threaten only a few homes near the border. Well thanks to the Israeli Embassy, here is some perspective. 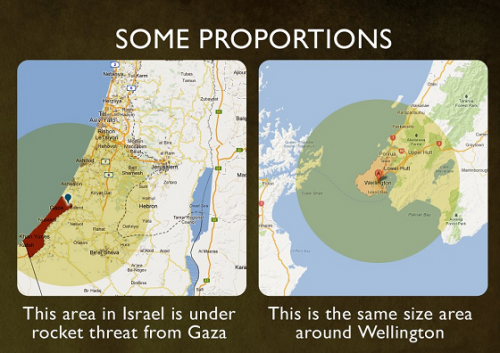 A peace settlement on 1967 borders is only possible if there is actual peace for land. But when the land already given up is used to launch thousands of rocket attacks on civilians, then it hardly provides much of an incentive to give up even more land.