The Standard has done three posts in two days calling for David Shearer to go, and on who should replace him.

While each is by a different author, I have been around politics far too long to think for a second that this is not part of a co-ordinated strategy to destabilise Shearer in the leadup to the Labour conference.

Otherwise why not wait until after the conference to see how he goes? Their authors know how destabilising their posts will be, and that it will detract from the Labour conference – even if Shearer performs well.

The three posts are:

Again, if you think this is a coincidence, I have a bridge for sale. Someone has decided to push the button. The only rational reason to come out all guns blazing just seven days before the Labour Annual Conference is so that Shearer is undermined at the conference.

UPDATE: The cartoon below is in today’s Dom Post. 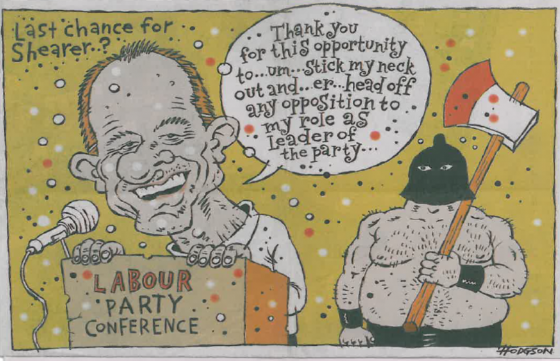 UPDATE2: Auckland based Tapu Misa writes in the NZ Herald:

As the Labour Party heads into its annual conference this weekend, it has some big questions to ponder. But first it has to ask itself how long it can afford to persist with David Shearer as leader.

Again the timing is fascinating – writing for him to go the week before the conference, rather than waiting to see how he performs at the conference.