Kings of the Gym had its premiere at Circa last night. It was fabulous fun, with some stand out acting.

The play is set at decile 2 Hautapu High School, and pokes lots of fun at education bureaucracy, political correctness, Destiny Church and even Novopay gets the odd mention! The set was very authentic, with even the fluorescent tube lights in the office reminding you of your own school days.

Ginette McDonald plays Viv Cleaver, the school principal. The principal, referred to as Cleavage by the PE HOD Laurie, is a politically correct bureaucrat who is obsessed with improving the NCEA grades and making sure her friends in the education bureaucracy think highly of her. It is a tribute to McDonald’s skills that she doesn’t just make Cleaver a caricature – but actually turns a pretty unsympathetic character sympathetic.

McDonald has some comic gold lines, and is just superb. 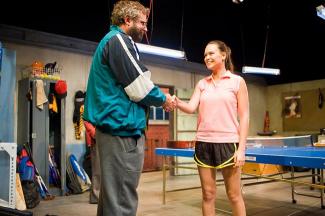 Paul McLaughlin portrays his character perfectly.  Laurie drives Cleaver mad. He mocks the curriculum and files it in the bin. He states how the PE curriculum mentions well-being 73 times, and winning just once – to stress it is not important. His idea of a class is to play soccer. He’ll often delegate the ref to someone else so he can watch TV and bet on the TAB.

But Laurie is a likeable rogue, and his kids all love him. In fact one of them has become the 2nd teacher in the department, and has seemingly thrown away any ambition and his degree, to be a mini-Laurie. That is Pat, played by Richard Dey. The chemistry between Dey and McLaughlin helps make the play so excellent. The looks they give each other, the hassling, and especially Laurie’s expression when he finds out the girl Pat likes is already engaged. Many comic moments.

You never see the kids on the stage, but they are used to humanise the characters. Cleaver and Annie are horrified that the Vietnamese student is called “Chopsticks” by Laurie, despite he fact that is the name he prefers. He is so good at soccer he is told he must play left footed. Laurie also tells the kids they must have at least three girls on each team, otherwise the boys will win. Hilarious, harsh judgement calls.

But Dougal is the student you hear most about. If he scores a goal, it is worth five points as Dougal has Downs. At first you think such statements are so insensitive, but you later hear how he helps Laurie after school stack up the gym equipment (even though Laurie can do it quicker by himself) and realise behind the gruff, Laurie is hugely protective of Dougal.

Acushla-Tara Sutton plays Annie, the student teacher. At first she is just an over eager high achiever who insists on goals for every class. She is also a top sportswoman, and on the verge of making the Silver Ferns. But the real tensions comes when it emerges she is a born again Christian, and a member of Destiny Church (they don’t call it Destiny in the play – but it obviously is). The real tensions come when in biology class she refers to there being two schools of thought on where humans came from. She also sets up a church youth group, and has some of the students make purity pledges.

The play isn’t mocking of Christians, or the church. In fact she plays tribute to how they helped her, and the real message of the play is about tolerance.

There are some great one liners such as how pregnancy and STDs are the only two areas where the school over-achieves, and a line by the principal about how if one particular female student abstains for even a week, that will reduce the chlamydia rate. Many laughs through the whole play. The first half was a bit more tense at times, while the second half which had the big plot twist and the eventual happy ending had more of those laugh out loud moments – not the dignified giggles – but the forced laughter as it was so hilarious.

Kings of the Gym was a terrifically funny play which made for a great night’s entertainment. Dave Armstrong has produced a very New Zealand comedy that has near universal appeal.