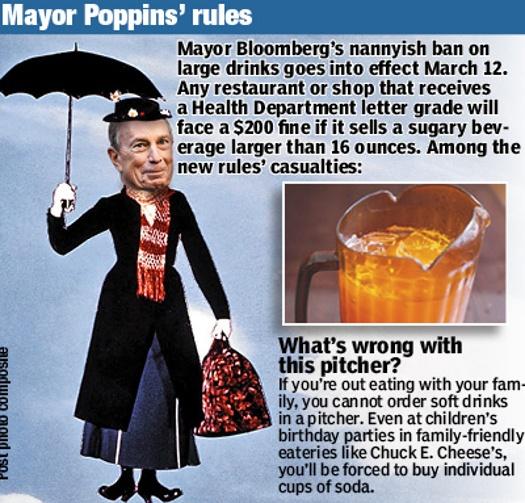 Nanny Bloomberg unleashes his ban on large sodas on March 12 — and there are some nasty surprises lurking for hardworking families.

Say goodbye to that 2-liter bottle of Coke with your pizza delivery, pitchers of soft drinks at your kid’s birthday party and some bottle-service mixers at your favorite nightclub.

This is what some taxpayer funded lobby groups push for in New Zealand. It isn’t the thin end of the wedge – it is the thick end.

Typically, a pizzeria charges $3 for a 2-liter bottle of Coke. But under the ban, customers would have to buy six 12-ounce cans at a total cost of $7.50 to get an equivalent amount of soda.

Imagine how many cans you will need to drink 10 litres a day!