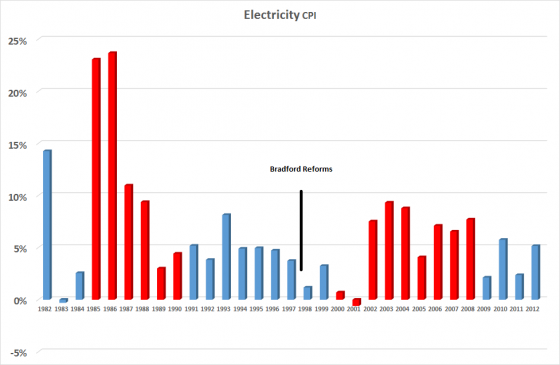 This graph is based on the data from Stats NZ for the electricity segment of the Consumer Price Index. It shows the annual increase in consumer electricity prices.

Labour are saying that it was the Bradford reforms that led to increased prices. in fact the four years after the reforms saw the smallest increases in 25 years.

Also worth noting that of the increases in the last four years, two of them were due to external factors – the GST increase (which had compensating tax cuts) and the introduction of the Emissions Trading Scheme.

UPDATE: David Parker is on record as saying a single buyer will increase the cost of power. Simon Bridges quotes from a 2006 cabinet paper by Parker:

“As Minister of Energy he said that “a single buyer would likely result in higher capital and operating costs”. He went on to say that: “The risks involved in changing arrangements could be significant. The resulting uncertainty could lead to investment proposals being put on hold. Direct implementation costs could be large.” And, he admitted that “The single buyer would be relatively poor at sustaining pressure on operational costs.”

Also another Labour MP has admitted what is driving the policy:

To win the 2014 election, Labour needed to move about 5 to 7 percent of the voting public to favour it.

Parker has admitted the policy will not reduce costs, and may in fact increase them.

Jones is basically saying we are doing this because we think some of the public will like the idea of the Government promising cheap power (even if it never happens).

Also this report makes clear that power generators are unlikely to invest in new generation under a state monopoly. Why would you risk investing hundreds of millions of dollars in extra generating capacity when a government department will unilaterally decide what price they will buy it off you for?

Contact Energy shares dropped almost 6 per cent in early NZX trading, with the company saying it was “hard to see” how it would have justified investing $2.5 billion in new power plants if the Labour-Greens electricity policy had been in place.

In a statement not issued to the NZX but received by BusinessDesk, Contact chief executive Dennis Barnes says “under the proposed model, it is hard to see whether such investment would be made viable and who would pay.”

“Competitive and efficient electricity markets attract investment and talent from companies like Contact,” said Barnes. “Over the past five years Contact alone has invested over $2.5 billion in building generation capacity to ensure the reliable, safe and secure supply of power to New Zealanders now and in the future.”

Maybe this is the master plan from the Greens? No new generation means no increase in greenhouse gas emission? We can become carbon neutral!