Labour and the Greens will unveil their policies to cut power prices on Thursday.

The announcement follows criticism of Labour leader David Shearer after he said the party would make changes, but did not say what they would be.

Shearer said on Sunday that Labour would make changes to the electricity sector if it was successful in the 2014 general election.

He said he was announcing the plan because it was only fair to those considering buying shares in Mighty River Power.

Or, they are trying desperately to scare people off. The more relevent information they should be disclosing is whether they will purchase back the shares, if they win Government.

“The reason we’re doing this is because we both share the same ambition to bring down electricity prices,” Shearer said.

Really? I hope media ask Labour about how their proposed changes to the Emissions Trading Scheme will double the impact of the ETS on power prices.

Also look at all these Green party policies that would push the price of power up:

Now if you think these policies will lead to cheaper electricity, I have a bridge for sale you can buy. 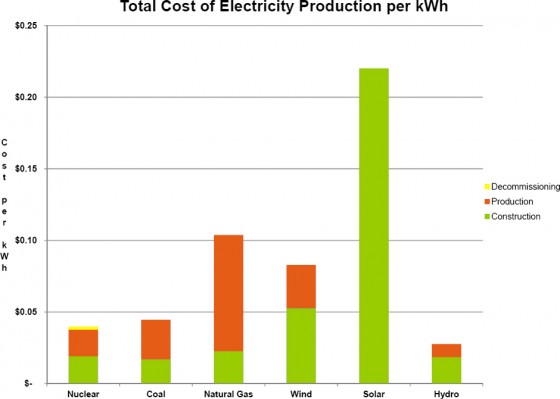 I can’t find data for New Zealand on costs of various sources, but this US graph illustrates pretty well.

Now nuclear is not an option for NZ. The Greens want coal banned. They also want no more large hydro projects. They want NZ to be 100% renewables. And both Labour and Greens want to double the impact of the ETS on power prices.

The idea of cheaper power prices under a Labour/Green Government is as plausible as Palmerston North becoming a tourist mecca.

I am a fan of renewable energy, but decisions on using it need to be based on it being cost effective. Blanket bans and prohibitions on coal and large scale hydro will inevitably lead to much higher power prices.