Dealing as I do, with matters of New Zealand Council finances, the one area that produces most comment, sometimes heated debate, is Council debt. Public discussion of Council debt is muddled, an often fractious difference of opinion generating more heat than light.

Compare these reassuring findings to those of the 2013 NZ LG League Table where the lowest ranked 15% (10 in number) of New Zealand Councils are revealed as exhibiting unfavourable financial sustainability and community affordability issues. Both contradictory positions can’t be right. Unfortunately, the debate over Council debt is complicated by unsatisfactory public reporting-disclosures.

Discussions of Council debt are often compounded by current Council practices. These amount to opaque, imprecise Council debt accounting and “smoke and mirrors” disclosures. It is tempting to suggest that these are deliberate attempts to suppress discussion of Council debt on a “don’t scare the horses” basis.

This is particularly evident for use of the term by Councils of “Internal Borrowing”, a meaningless label, better described as “Robbing Peter”, covering as it does Council treasury management dealings involving a clear misuse, (some might say misappropriation) of asset replacement funds.

Add to these sleights of hand a motivation for the more highly indebted Councils is to keep their heads down when their debt totals soar, along with a tendency toward misinformation.

Is it little wonder then? that public meetings of Council ratepayers, seeking explanations of Council debt are confused and dissatisfying. The aphorism of being kept in the dark … and fed mushrooms comes to mind … with Councils doing little to clarify such matters.

What’s more, in the most egregious cases, Councils taking on excess levels of debt play fast and loose. With the tacit approval and unremarked by their auditors, Councils show a breath-taking lack of process and accountability such as when they respond to a breach of previously imposed prudential debt limits. Without batting an eyelid they merely move the goalposts and increase their debt limits.

Such shifts of debt maxima are held out as legitimising higher debt. Such elastic and dishonest manipulation is just window dressing, when previously moderated (one would have thought audit-mandated) debt ceilings are then breached.

As a result, such simple informative expedients as providing meaningful year-on-year (apples with apples) Council or inter-Council comparisons of debt are rarely even-handedly reported. In these circumstances, perversely, a balanced, honest informative analysis of Council debt invariably requires some independent and determined digging.

It should not take special efforts to have Councils report their debt correctly, for make no mistake, Council debt analysis and evaluations are vitally important.

Unambiguous and balanced reporting of debt to ratepayers is essential, particularly when considering a Council’s financial sustainability because debt servicing costs have a huge impact upon Council rates.

Comprehensive (and comprehensible) accounting for Council debt includes reliable information addressing the influence of debt servicing charges … that is, the impact of debt interest and principal upon Council expenditures and rates settings.

Debt servicing costs are the one variable expense which of all Council cost factors has “the” most direct influence upon Council rates and charges.

Councils generally manage their day-to-day expenditures adequately so as to match their revenue funding and operational expenditures. Their management and disclosures of debt and of debt servicing charges … less so.

This partly is due to the less predictable, though direct linkage of debt to capital project costings. Debt funded capital works have a poor record when it comes to overruns of project costs which are then reflected in debt (funding) blowouts.

Look no further for a case study of poor contract and debt management than the celebrated on-going saga of the Kaipara District Council-Mangawhai wastewater plant, an over 100% cost budget haemorrhage … referred to in greater detail below.

There are a number of possible reasons for this and these include:

Most of the case studies are merely vexatious but one recent high profile example is not. It is a worst case cautionary tale sub-titled “A good Little Council gone bad”. The recent audited financial statements of the Kaipara District Council display most of the deficiencies of debt disclosure already discussed. The Kaipara case appears to be one where they have failed to disclose material amounts of debt attached to the Mangawhai wastewater scheme.

Admittedly, the financing of this large capital project was complicated and involved many of the interest holidays, interest rate increases and debt servicing charge deferrals referred to above. The consequences of these apparent defaults of audit practice and accounting disclosures of Council debt are proving difficult in the extreme.

A number of the answers now only slowly appearing, relate to many of the points made in this paper, for example, previously hidden unreported (secret) debt and interest blowouts concealed for fear of adverse public (and political) comment and push back.

Closely associated with these people-based motivations (above), given Council’s stage – managing of public debt information, a further issue arises from accounting disclosures of Council debt which tend to hide or under-report Council debt.

Some pitfalls of poor disclosure

Councils, with audit approval currently can misreport their debt. By making accounting errors or adjustments, including funds transfers, using misleading nomenclature and with off sets of their debt the poor ratepayer is understandably left bemused and confused.

At times, as has been the case at Kaipara (there are numerous other instances) even the complete omission of future debt and/or of debt contingencies has got past the auditors. Another on-going, as yet unsettled example concerns the confusion that surrounds the disclosure of Council interest rate “swaps”. All of these aberrations tend to obscure the full extent of Council liabilities and at best deliver opaque disclosures.

For example, it is abundantly apparent that Kaipara’s omission of their actual debt and debt contingencies in audited Council financial statements for two years running, mislead the readers of their financial statements about the true debt position. As an analyst working closely with the Council on financial matters at the time, I was blindsided, imagine the position then of laymen ratepayer readers of the accounts who were always far removed from and were given no sense of the material blowout of debt of the Mangawhai wastewater scheme.

This often mystifying reportage of Council debt achieves confusion in the minds of layman ratepayers. They should not be expected to be put to the trouble of interpreting such subtleties as they are entitled to rely on audit field work being conducted correctly.

All that ratepayer readers of Council financial statements really want to know accurately is … “What are the set prudent limits of Council debt?” and “how much” do their Councils currently owe to their bankers and creditors?

Simple really, until as already discussed Councils get busy and cloud this picture.

Ratepayers, even when provided with the “How much” knowledge, may still be nowhere near getting the full picture. Of most significance, even with accurate debt totals provided, what is often missing is the plain English information addressing issues of the long term sustainability of Council debt.

Tucked away in the long term plan’s treasury management policies there will be detailed notes and assumptions relating to debt management policies and limits. The ten year long term plan (only published every three years) carries with it the implied assurances that planned debt levels will be both prudent and feasible. Annual reports on the other hand, comprising the Council’s more accessible financial statements, rarely repeat this planned debt-related sustainability information.

Seldom dealt with in Council public documents are consideration of such central questions as disclosing a rationale for any recent shifts in debt limits or reference to prudent and feasible debt maxima relative to other peer New Zealand Councils … the “If others have done it … then so can we? test. Ratepayers search in vain for a clear exposition of Council debt sustainability (and community affordability) issues.

There is some hint of good news in the last year , (to June 2012) as several Councils have turned the corner by commencing debt reduction programmes, a far cry from previous years where most Councils just forged ahead regardless with higher planned and actual borrowings.

The examples given … of the pitfalls of poor debt disclosure … complicate an already murky area. To summarise: From questions raised at recent public meetings, it is abundantly clear that ratepayers are not being kept properly informed on matters of Council debt. Council financial managers and their auditors should take note; budding Councillors, to their advantage might study some Accounting/Management Accounting 101.

The reporting of debt parameters on a proposed mandated benchmark analysis planned to be introduced this (last?) year, can’t come quickly enough. With this purpose-built array of useful financial information, ratepayers will, it is hoped become much more financially literate and astute in making assessments concerning their Council’s financial, particularly debt management performance.

In the course of debt analysis, simple debt totals provide nowhere near the whole picture. That is, tables of absolute debt totals only go so far, as do their reportage on a debt per ratepayer basis. Two similar Councils with the same debt totals can be quite different in debt-financial sustainability terms depending on the value of Council owned assets … the asset backing for their debt.

Consider this householder analogy designed to suggest how ratepayers might be assisted in making informed judgments of their Council’s debt sustainability.

The principle is the same when discussing Council debt. For if ratepayers (and their Councillors and commentators for that matter) focussed less upon debt totals and more upon the debt to asset ratios then much more productive well founded discussions would surely follow.

This claim is made subject to one major reservation, that is, the matter of infrastructure asset revaluations. The suggested form of debt to assets ratio analysis is promoted, but unfortunately asset revaluations of Council’s large network (infrastructural) assets represent a significant fly in the ointment in a search for reliable measurements of sustainable debt levels.

For when we use the revalued asset figures in a debt to assets ratio measurement, the present systemic overvaluation of Council assets skews our results. An apparently inflated high value of assets appears to credibly support a higher than is warranted debt level. Some markdown of the suggested debt maxima is required to, with realism allow for this overstatement.

Over many years, Councils, aided by the professional valuers normally acting for asset planning engineering purposes and using asset replacement valuation analysis have tended to overstate the security values of Council owned infrastructure. By using inflated engineering (optimised) replacement values for accounting, to meet bank security requirements, borrowing against these values has been permitted to artificially expand.

These higher than warranted asset values have also been used when considering matters of Council financial sustainability … for example, they are used unadjusted in the NZ LG League Table rankings. The mischief here is that the overvalued asset base has the effect of apparently supporting an inflated level of associated debt. In all our assessments of sustainability of Council debt this influence should be factored out reflecting lower sustainable debt levels than (on the face of it) seem appropriate.

These complications aside, the use of an asset backing ratio is still a favoured, better and more rounded form of analysis than just simplistic comparisons based on comparing raw absolute debt total values (debt per ratepayer) data.

We’ve seen significant increases in both spending and debt by local authorities in the last decade – both growing faster than the economy as a whole, which means long-term it is unsustainable. Also grateful to Larry for his expert analysis.

The full table of NZTLA Councils ratepayer equity is available at a modest charge contact Larry. 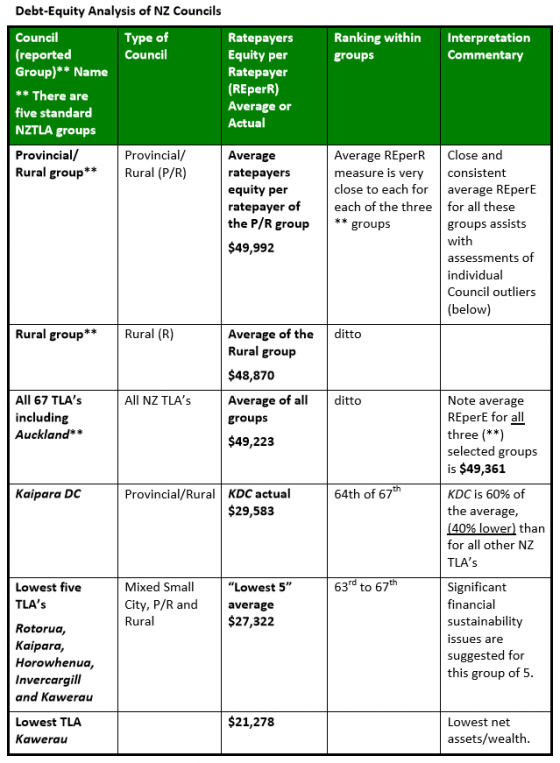