Kiwi expatriates are earning a fortune overseas, and barely one-tenth say they would be comfortable raising a family back home on New Zealand wages.

For the first time – according to an extensive annual survey released this weekend – more than half our expats are earning $100,000 a year or more.

Kiwis are hitting the jackpot in high-tech, engineering and financial sectors as the overseas experience becomes permanent in North America, Asia and Australia.

Kea, the expatriate network for New Zealanders, polled more than 30,000 people living abroad for its latest survey, Every Kiwi Counts.

Nearly half of the respondents hadn’t returned home in the last year – and only 46 per cent said they “definitely or probably” would return to live here.

New Zealand’s lifestyle and relatively clean environment have often tempered concerns about the brain drain. But while most expats agree their homeland is beautiful and safe, that isn’t nearly enough to lure them back.

No surprise many Kiwis earn more overseas. Almost everyone takes a pay drop when they return home. Of course with some on the left advocating no person should be able to earn more than three times the average wage, and calls to tax rich pricks more, that won’t help.

In 2008, Prime Minister John Key campaigned hard on stemming the brain drain but has more recently spoke of a “brain exchange” when defending his Government’s record.

Statistics NZ reports the country gained 2,000 migrants in July, the highest inflow in four years. The net loss of 1,200 migrants to Australia in the same month was the smallest such loss in four years.

“The number of New Zealanders returning home is also increasing, which reflects improving opportunities as the economy picks up,” a spokeswoman for Key said.

Key’s office also said economic growth, at 2.4 per cent over the last year, was keeping pace with Australia – “and economists are forecasting growth to increase, driven by rising consumer and business confidence, and a lift in construction”.

Monthly figures can be variable. I prefer to look at the seasonally adjusted annual figures. Also best to look at just migration patterns of NZ citizens, as that excludes new migrants, which can change due to government policy. 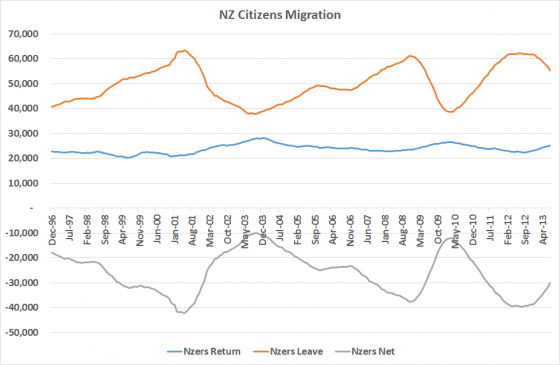 The level of NZ citizens leaving changes a lot over time. It peaked in 2001, hit a low in 2003, and then constantly grew until 2009 when it fell to an almost new low. Over the next two years it increased again to near record levels, but in the last year has been falling away.

The level of NZers returning home varies between 20,000 and 30,000 a year. At the moment it is increasing also.